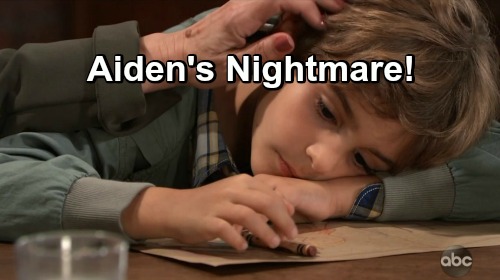 General Hospital (GH) spoilers reveal that Aiden’s (Jason David) ordeal is far from over. The poor kid’s been through a lot thanks to Charlotte’s (Scarlett Fernandez) bullying and she’s not the only one who’s not fond of him. Charlotte admitted that many of Aiden’s other classmates think he’s weird.

Of course, Charlotte may be a big reason why. She’s been fueling this bullying for a while now, so it’s no surprise that practically the whole class has turned against Aiden. He has no self-esteem whatsoever, but Liz (Rebecca Herbst) and Franco (Roger Howarth) will continue to work on that. They’ll try to help Aiden understand that it’s OK to be different and he’s perfect just the way he is.

Cameron (William Lipton) will probably take Laura’s (Genie Francis) advice as well. Since Aiden looks up to his big brother so much, Laura thinks it’d be helpful for Cam to praise him. Any support could lift Aiden’s spirits.

General Hospital spoilers say Cam will spend a little more time with Aiden during the Christmas festivities. Jake (Hudson West) will also get on the holiday fun. The boys will have a great time, but Aiden will face some disappointment this year, too. December 21 will bring a tough blow for Aiden, so he may get some reminder that he’s not like the other kids.

Whether someone points it out or he gets teased over his girly toys, Aiden will be left feeling like an outsider again. It’s clear that GH isn’t done with this important storyline. From the get-go, it seemed like Charlotte was coddled in this mess.

Charlotte’s apology wasn’t all that great and it felt like she was more remorseful about upsetting her parents than hurting Aiden. She appears to think Aiden deserves it for being unusual. Nevertheless, Liz feels like they can all move on now that the bully has been identified and dealt with. She’s about to find out just how wrong she is.

Charlotte could easily fall back into old habits thanks to peer pressure. If not, there’ll surely be some other bully who’s willing to take the lead. Many GH fans are getting nervous about where all this is heading. It’s even led to suicide attempt fears on social media.

That would obviously be a risky direction for General Hospital to take, especially with such a young child. However, there have certainly been news stories that reflect the unfortunate trend. It’s doubtful they’d let Aiden succeed, but an attempt alone would be earth-shattering to all parties involved.

Liz, Franco, Lulu (Emme Rylan), Valentin (James Patrick Stuart), Nina (Michelle Stafford) and Willow (Katelyn MacMullen) would all be deeply shaken by something like this. It’d pull Laura, Charlotte and Aiden’s brothers into the aftermath, too. General Hospital may or may not let this turn into such a serious warning, but Aiden’s clearly going to hit some form of a rock bottom.

It looks like some dark days are ahead for Aiden and his loved ones. We’ll give you updates as other GH details emerge. Stay tuned to the ABC soap and don’t forget to check CDL often for the latest General Hospital spoilers, updates and news.