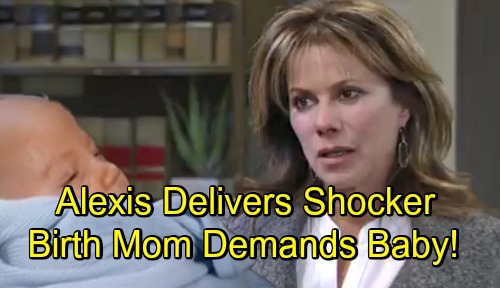 General Hospital (GH) spoilers tease that Alexis (Nancy Lee Grahn) will get some horrible news. She’ll have to spread the word and that should be even more awful. Alexis will definitely face a task she’d rather not take on. It sounds like she’ll have to break several hearts, so GH fans should probably brace for more baby drama.

On a new GH episode August 17, the terrible updates will arrive. Alexis will process what she learns and undoubtedly pass along the info. We’re betting the anonymous birth mother will decide to take her baby back. Sam (Kelly Monaco) will give Lucas (Ryan Carnes) some much-needed encouragement on August 20, so it makes sense that she’ll comfort him over the loss.

Of course, Brad (Parry Shen) should be in full-blown panic mode by then. General Hospital viewers know the birth mom’s real baby is no longer in the picture. Wiley died during his first night home with Brad, so he swapped the kid with Michael (Chad Duell) and Nelle’s (Chloe Lanier) little one.

That means Brad will have to make a tough call. Adopting a child is no easy feat, so Brad may want to preserve future chances. Revealing the baby switch could spoil his plan to have a family with Lucas. The cops could come after him, too. Will Brad really be willing to risk everything just to make Michael happy?

Over the next couple weeks, poor Michael will definitely be in bad shape. Brad will undoubtedly see that, so it should be difficult to keep his mouth shut. He can’t pretend this is just some random lady’s baby. It’s Jonah Corinthos! Michael would love the opportunity to raise his son. His family would cherish this kid as well, so Brad’s going to be quite tormented.

General Hospital spoilers say Brad will seek advice from Julian, but it’s doubtful he’ll reveal the whole story. That’ll probably be for Julian to discover on his own. Regardless, Alexis will bring sorrow and Brad will be left with a growing mess. Even if he lets the birth mom take “Wiley,” Brad will still have to worry about the truth coming out.

Are you ready for the next phase of this hot plot? How will Brad handle the rising pressure? We’ll keep you posted as other GH details emerge. Stay tuned to the ABC soap and don’t forget to check CDL often for the latest General Hospital spoilers, updates and news.