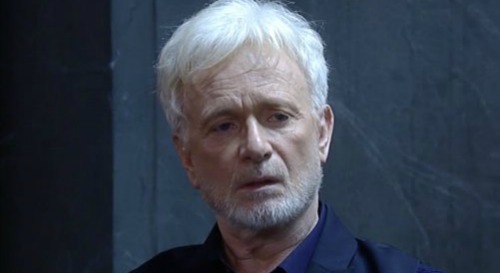 General Hospital (GH) spoilers tease that some behind-the-scenes drama may have led to some shockers and shakeups. GH viewers know the show likes to bring fan favorites back from time to time. Robin (Kimberly McCullough) pops up for big events or when Anna (Finola Hughes) needs her daughter’s support. Robert (Tristan Rogers) recently returned for a return stint as well.

Now Britt (Kelly Thiebaud) is in the middle of a fun storyline and Spencer’s (Nicholas Bechtel) been stirring up trouble, too. It’s clear that General Hospital likes to mix it up with returning characters when they can. Unfortunately, not every attempt to score a comeback pans out. Sometimes schedules don’t coordinate or the show just can’t get an actor’s cooperation.

Soap Opera Digest put out a blind item that reveals some disappointing news. One of the four soaps tried to secure a popular vet’s return by offering him a new story. Sadly, the actor declined the opportunity. Although there’s no confirmation on which soap the blind item was about or why the offer was rejected, this kind of tidbit is certainly open to speculation.

General Hospital has been known to have some issues going on behind the scenes. Certain actors don’t always like who they’re working with or the stories that have been written for them. Could those factors have influenced the star this blind item was about? If the item’s indeed tied to GH, that’s a possibility to mull over.

One option that immediately comes to mind is Anthony Geary (ex-Luke Spencer). When he left General Hospital in 2015, Geary was quick to badmouth Ron Carlivati (GH’s head writer back then, Days’ current head writer). In an interview with TV insider, he voiced his displeasure with Carlivati’s decision to rewrite history and redeem Luke in some ways.

“It was ill-conceived, cheesy and showed a lack of imagination,” Geary said about some of the GH material he was forced to play. He later added, “I hate redemption.” Geary made a blink-and-you’ll-miss it popup for Traci’s exit in 2017, but he may not have been on board for another round of GH craziness. If the show approached Geary about a lengthier stint, he might’ve given them a big fat no.

There’s no guarantee that’s how it played out, but it’s reasonable to think Geary would be a tough one to win over! Still, it’d be nice if they could convince Geary to make a comeback down the road. If they let him have plenty of input on a better story, who knows? It might happen someday. GH fans don’t want to be robbed of Luke’s epic return!