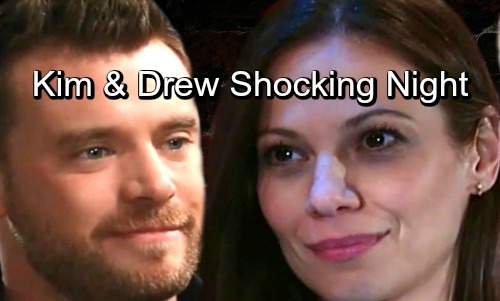 General Hospital (GH) spoilers tease that Drew Cain (Billy Miller) and Kim Nero (Tamara Braun) will soon be drawn together in grief. Their son’s grim diagnosis will lead to a surprising night together. Oscar Nero (Garren Stitt) has an inoperable brain tumor, so his parents are struggling with the idea of losing him. They’ve chosen to keep Oscar out of the loop for now, but big changes are looming.

As Kim and Drew bond over their sorrow, Kim’s relationship with Julian Jerome (William deVry) could take a hit. General Hospital spoilers say she’ll push him away as she deals with her worst nightmare. Could this be building to a revived romance for Drew and Kim? He doesn’t remember their previous relationship, but sometimes a connection matters far more than memories.

Drew is doing his best to get over Sam McCall (Kelly Monaco), but it’s difficult since she wants to comfort him. That’s why Drew had to cut it off and let her know he couldn’t go down this road. If he starts to need Sam, it’ll break his heart all over again. Leaning on Kim will be easier, especially since they’re in this together. As Oscar’s mom and dad, they’re the only ones who really understand.

When Margaux Dawson (Elizabeth Hendrickson) came on the scene, viewers expected her to be nudged toward Drew. GH seemingly wanted to recreate the sparks fans saw while Miller and Hendrickson were working together on The Young and the Restless. However, Margaux’s character is awfully uptight. It’s holding this romance back and getting in the way of their chemistry.

General Hospital could always try again once the DA’s loosened up, but many fans aren’t feeling it right now. Margaux’s sneaky, snippy and far from the kindhearted woman Drew deserves. Kim, on the other hand, is gentle and certainly has the hots for Drew. Throw in the emotional vulnerability of what she’s going through and it could mean “Krew” is coming up.

Where will Kim and Drew’s upcoming night together take place? Could it involve some steamy scenes in a moment of weakness? That’s one possibility to consider. Of course, it’s also possible Drew and Kim will spend the night in the hospital with Oscar. Even if this all-nighter isn’t exactly sexy, it could bring them much closer.

General Hospital spoilers say Kim and Drew will have some complicated feelings to sort out. If Oscar dies, their mourning could bring a reunion. If their son survives, perhaps the joy of second chances will lead to one for their relationship as well. We’ll give you updates as other news comes in. Stick with ABC’s GH and don’t forget to check CDL often for the latest General Hospital spoilers, updates and news.