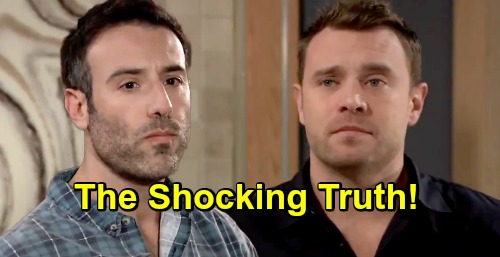 General Hospital (GH) spoilers tease that there’s much more to “Hank” (Coby Ryan McLaughlin) than meets the eye. Jason Morgan (Steve Burton) was immediately suspicious of Hank and it’s easy to see why. Hank definitely came to town with some big secrets and they’re sure to turn Drew Cain’s (Billy Miller) world upside down.

Of course, Drew can’t find out anything if he doesn’t meet with Hank. He resisted the idea during his last chat with Kim Nero (Tamara Braun), but she pointed out that this mystery man could serve as window to the past. Kim was able to give Drew one chapter of his story, but Hank could offer some details on very different one.

General Hospital spoilers say Drew and Hank will eventually come face to face. Whether Drew calls the number provided or not, there’s no way Hank is leaving Port Charles without a meeting. It’s clear that he came to PC with a goal in mind and he intends to pull it off.

If Drew won’t schedule a chat, then Hank could just appear when Drew least expects. After all, it’s doubtful that meeting between Hank and Jason was a coincidence. Hank was most likely following Jason until just the right moment. Since he probably knows all about Drew’s memory loss and plastic surgery, pretending to be shocked by Drew’s twin was his best approach.

Hank must be keeping tabs on Drew as well. He may even be watching Kim and Oscar Nero (Garren Stitt) if he thinks he can use them to his advantage. Hank could always insert himself in their lives and convince them he’s a nice guy. Jason wasn’t fooled, but Oscar and Kim might fall for Hank’s act hook, line and sinker.

Drew may be haunted by the secrets Hank’s keeping. That’s especially true if Hank gets involved with the people closest to Drew and starts messing with them a bit. Hank has at least a couple important links to PC besides Drew, so some surprising faces could enter this story sooner or later.

As everything spirals out of control, Drew may realize he has no choice but to have the memory procedure done. It might be the only way to confirm or deny Hank’s looming accusations – and you can bet there’ll be some. There’s a good chance Hank either feels he was wronged by Drew or they were part of some dark plot together. Drew may not be able to handle such uncertainty about the truth.