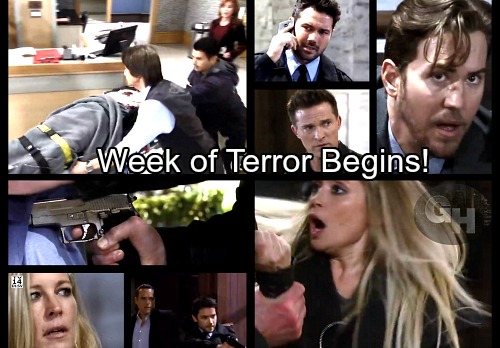 General Hospital (GH) spoilers reveal in a new promo video just released Monday, January 22, that Port Charles appears to be under violent attack this week! There are shootings, gun battles, kidnappings and more. GH fans see Detective Dante Falconeri (Dominic Zamprogna) and Sonny Corinthos) kick in a door, with guns drawn as Detective Nathan West (Ryan Paevey) is desperate trying to reach someone by phone… to no avail. 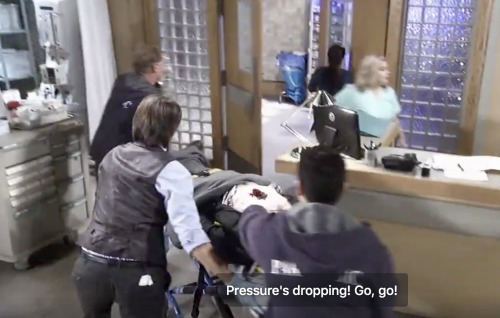 Someone is rushed into General Hospital on stretcher dying with their pressure dropping, and a clear gun shot wound to their chest as Bobbie Spencer (Jacklyn Zemen) watches helplessly. Nathan raises his gun – Dr. Hamilton Finn (Michael Easton) is hand-cuffed to a staircase desperate to escape.

Meanwhile Josslyn “Joss” Jacks (Eden McCoy) is screaming at a door that has wires attached to it. She looks to be locked on the inside, calling for anyone outside to open it. Somebody sinister grabs Lulu Falconeri’s (Emme Rylan’s arm as it becomes clear that no one is safe in Port Charles. 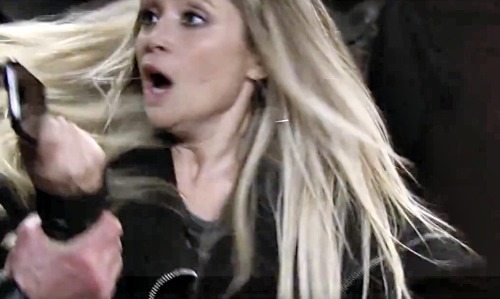 General Hospital’s spoiler promo continues with Peter August (Wes Ramsey) looking up as Maxie Jones (Kirsten Storms) yells, “Oh my God!” and Nathan looks startled. Anna barges in a door with her gun in her hand as SHOTS ARE FIRED!

No one is safe this week as Faison’s reign of terror begins! Who is in the stretcher – is it Anna, Nathan – we can’y be certain yet. Be sure to tune into ABC’s General Hospital (GH) to catch up on all the excitement happening in Port Charles right now. Check CDL General Hospital spoilers often for updates, news, and spoilers!