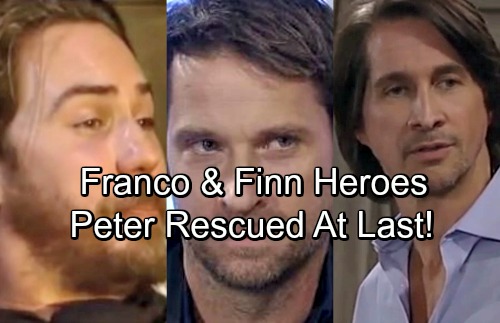 General Hospital (GH) spoilers tease that Peter (Wes Ramsey) will FINALLY be rescued! Whether you love him or hate him, almost everyone can agree it’s time to end the captivity story. It was fun at first, but most GH fans are ready to move on.

Fortunately, General Hospital spoilers say Peter’s about to get a lucky break. It turns out that unhelpful boy scout will pitch in after all. During his recent trip to the cabin, Wyatt (Patrick J. Gibbons) wasn’t too keen on summoning help for Peter. Even the tantalizing promise of merit badges wasn’t enough to convince him.

However, Wyatt suggested he might bring Peter back some s’mores later. If not, Wyatt should at least return for the bugle he accidentally left behind. That return trip should give Wyatt a chance to learn more info. It looks like he’ll overhear Liesl Obrecht’s (Kathleen Gati) distinctive accent and catch a glimpse of her shoes.

Wyatt may get spooked and take off, but at least he can file those clues away in the back of his mind. Later, General Hospital spoilers say Franco (Roger Howarth) will have an art therapy session with the boy. Wyatt will have a lot to spill once they get talking and painting!

Meanwhile, it seems Dr. O will head back to GH for more meds. Peter still has an infection, so it’s important to get him the treatment he needs. Liesl still wants to pry a confession out of him, which means she has to keep Peter alive.

Of course, Liesl won’t count on Wyatt recognizing her voice and shoes. General Hospital spoilers hint that Wyatt will tattle to Franco, so that should kick off the big rescue mission. Franco knows how Obrecht operates, so he won’t doubt Wyatt’s claims for a second.

Afterward, Finn (Michael Easton) will get involved. Like Franco, Finn should understand that Dr. O’s perfectly capable of hiding a hostage. Once they’ve got a clear plan in mind, General Hospital spoilers say Franco and Finn will head to the woods. Perhaps Wyatt will point them in the direction of the cabin.

It sounds like they’ll burst in and save the day. Peter may still have to face legal consequences, but he’ll just be glad he’s not strapped to that bed anymore! We’ll give you updates as other GH news comes in. Stay tuned to the ABC soap and don’t forget to check CDL often for the latest General Hospital spoilers, updates and news.