General Hospital Spoilers: Franco and Liz’s Wedding Day Fiasco – Obstacles Hit as They Fight to Say ‘I Do’ 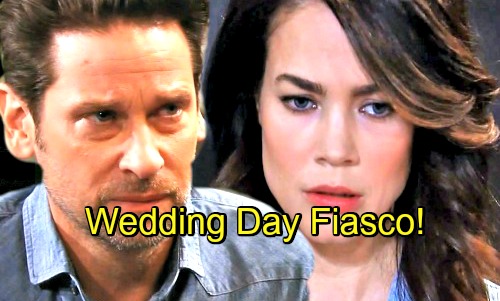 General Hospital (GH) spoilers tease that Franco Baldwin (Roger Howarth) and Elizabeth Webber (Rebecca Herbst) have another wedding coming up. Their last marriage attempt was thrown off by Franco’s showdown with Jim Harvey (Greg Evigan) as well as a shocking earthquake. Now Liz and Franco are ready to try again, so their next nuptials are set for this fall.

There probably won’t be any natural disasters this time around, but that doesn’t mean the event will go as planned. General Hospital spoilers say the ceremony and everything leading up to it will be full of surprises. You can bet some crazy twists will shake things up before they actually say “I do.”

Frank Valentini, GH’s executive producer, promised some fun in an interview with Michael Fairman. He hinted, “How could a wedding between Liz and Franco be anything but explosive and hilarious?” Roger Howarth will certainly bring the hilarious side of it. He always manages to inject some humor in his scenes, even when there’s major drama going on.

Of course, Valentini also suggested that the wedding would be “explosive.” What did he mean by that? It’s possible it’s an ominous clue, but we wouldn’t count on something too awful. Valentini could be referring to some conflict among the wedding guests or perhaps some literal explosions at the gathering. It might be funny if Franco has to put out a fire or two!

Nevertheless, it’d be cruel to make “Friz” fans suffer through a second failed wedding. Since we’ve already seen a botched one, it seems likely that Franco and Liz will indeed make it official. This couple should survive the ceremony and seal their union with a passionate kiss.

The reception could provide an opportunity for chaos as well. There’ll be plenty of chances for mishaps like sudden tumbles and falling cakes. Maybe some feuding attendees could even present a problem. This after-party could bring a fistfight and turn into a total spectacle.

Bottom line, Franco and Liz will have to put up with a lot on their big day. They’ll face several hiccups, but it should all be worth it in the end. Are you anxious to see the “Friz” wedding and the mayhem it causes? We’ll give you updates as other General Hospital news comes in. Stay tuned to ABC’s GH and don’t forget to check CDL often for the latest General Hospital spoilers, updates and news.