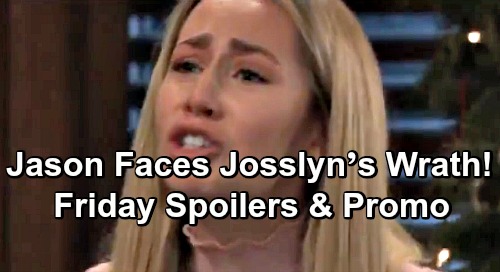 General Hospital (GH) spoilers for Friday, December 21, tease that Peter (Wes Ramsey) will show a little more compassion. He decided to change his story at the PCPD, which allowed Liesl Obrecht (Kathleen Gati) to walk free. Peter suggested that he was trying to forgive for Nathan’s (Ryan Paevey) sake, so Anna’s (Finola Hughes) hoping her son can forgive her, too.

It’ll be hard for Peter, but he’ll take Anna up on her latest invitation. When he shows up at the house, Finn (Michael Easton) will make an excuse to bail. He’ll ask if Peter would mind filling in for him, but he’ll really just want Peter and Anna to have some alone time. They need a chance to talk and hopefully work through the issues of the past.

Elsewhere, Jordan (Briana Nicole Henry) will deliver bad news to Stella (Vernee Watson). She may provide updates on all the recent drama between Marcus (Nigel Gibbs) and Mike (Max Gail). Stella will inevitably feel caught in the middle of this mess. Mike’s a good friend of hers and Marcus is Stella’s former flame. She has a strong connection with both of them, so this will certainly be a tricky dilemma.

At GH, Bobbie (Jacklyn Zeman) will panic over a Christmas snag. She’ll track down Monica (Leslie Charleson) and declare that they have a “very big, Santa-sized problem.” Of course, Monica will step up to make sure everything works out for the kids. She won’t let anyone be disappointed this holiday season. Oscar (Garren Stitt) will do his part to make this happen as well.

Over with Michael (Chad Duell), he’ll meet up with Willow (Katelyn MacMullen) and suggest that they should do something. Perhaps they’ll attend a last-minute bereavement group meeting. This is a tough time of year for those in mourning, so maybe there’ll be a few people gathering.

If not, Michael and Willow could always make their own two-person meeting. Opening up over coffee could also be helpful. Across town, Sonny’s (Maurice Benard) will break again as Mike’s condition continues to decline. Mike won’t remember any of the chaos surrounding the “kidnapping” or Yvonne’s (Janet Hubert) marriage. He’ll simply insist that he’s waiting on his best gal to show up.

General Hospital spoilers say Sonny will try to explain things in the gentlest way possible. Of course, he’ll know he’ll just have to explain it again in few hours. Mike’s memory is fading fast and that’s just something Sonny will have to accept.

Next, Aiden (Jason David) will face a difficult blow. Some disappointment is headed Aiden’s way, which is unfortunate since he’s been through so much already. Finally, Josslyn (Eden McCoy) will unleash her wrath on Jason (Steve Burton). She’ll explode at him for keeping Oscar’s (Garren Stitt) cancer a secret and letting her believe she got dumped for no reason.

Josslyn was devastated and lost precious moments with Oscar. Since Oscar may not have much time left, Joss will be furious with Jason for staying quiet. General Hospital fans won’t want to miss the tense scenes ahead. We’ll keep you posted as other GH details emerge. Stick with the ABC soap and don’t forget to check CDL often for the latest General Hospital spoilers, updates and news.