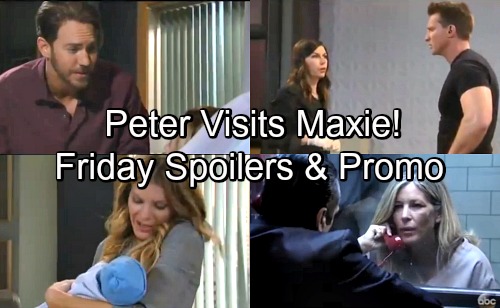 General Hospital (GH) spoilers for Friday, June 1, tease that Nina (Michelle Stafford) will take a breather from all the Valentin (James Patrick Stuart) and Peter (Wes Ramsey) drama. Once she’s holding little James in her arms, all her troubles will melt away. Nina will introduce herself as his aunt and promise to tell him all about his great dad. Nathan (Ryan Paevey) would’ve been one proud papa!

Meanwhile, Anna (Finola Hughes) will fill Robert (Tristan Rogers) in on the latest developments. When he learns Peter (Wes Ramsey) escaped, Robert will guess that Anna’s happy about that. She may admit she’s glad Peter has a second chance out there. However, Jason (Steve Burton) will have concerns about what’s ahead for Anna. He won’t feel confident that Peter’s going to leave his mother alone.

Anna will reassure Jason, but he’ll remind her that Peter already tried to kill her once. What makes Anna think he won’t do it again? Anna may not have a good answer for that. She just knows that she cares about her son and doesn’t want to see him suffer.

Back at GH, it looks like Maxie (Kristen Storms) will have a startling dream. General Hospital’s new preview video shows Peter approaching Maxie’s bed and stating that he had to see her. Since Peter changed into a blue shirt before being kidnapped, that doesn’t line up with this free, red-shirt wearing visit.

Maxie will undoubtedly awaken soon and realize it was all in her head. She’ll be forced to accept the fact that she has feelings for Peter, but she’ll do her best to dismiss them. Nevertheless, Maxie could change her tune when she learns Peter’s gone. She’ll eventually suspect this is more than a case of making a break for it.

Unfortunately, Nelle’s claims aren’t true at all. Carly didn’t shove her, but there’s no proof of that yet. At Pentonville, General Hospital spoilers say Carly will seek updates from Sonny (Maurice Benard). She’ll hope for good news from Jason (Steve Burton), but Sonny may admit that there’s been no progress.

Still, Carly will try to stay upbeat about her situation. She’ll trust that Jason and Spinelli (Bradford Anderson) can come through for her sooner or later. We’ll keep you posted as other GH details emerge. Stick with the ABC soap and don’t forget to check CDL often for the latest General Hospital spoilers, updates and news.