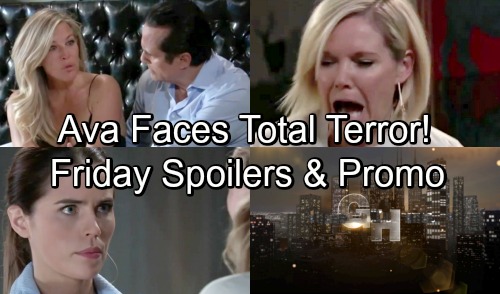 General Hospital (GH) spoilers for Friday, November 2, tease that Carly’s (Laura Wright) discovery will bring chaos. At the fundraiser, Carly was all set to bob for apples when Mary Pat bubbled up to the surface. The crowd will reel over the shocker, but Chase (Josh Swickard) and Jordan (Briana Nicole Henry) will take charge of the situation. They’ll calm everyone down and try to get some answers.

Laura (Genie Francis) will wonder who could commit such a heinous crime. She’ll be appalled by this ruthless act of violence, but Ryan (Jon Lindstrom) should be satisfied with his handiwork. When Ryan’s grilled about Mary Pat, he’ll admit he talked to her at The Floating Rib earlier. Of course, Ryan will leave out the part where they met on the pier and he skulked after his prey with a metal pick!

Later, Chase will make a ghastly discovery of his own. Will it be the murder weapon or some other bloody evidence? Regardless, the cops will realize they’re dealing with someone menacing. At the gallery, Ava (Maura West) will freak over something she spots. She’ll let out a bloodcurdling scream, but what will she be looking at?

This might be a Halloween prank or a fantasy of some sort. GH did a fake-out not too long ago where Laura was stabbed, so they mix in phony bombshells from time to time. Back with Carly, she’ll try to process Mary Pat’s murder. General Hospital spoilers say Carly will feel unsettled as she opens up to Sonny (Maurice Benard). She’ll have to ask herself who would do such a thing.

Over with Nina (Michelle Stafford), she’ll have an interesting chat with Sasha (Sofia Mattsson). After Sasha expresses concern about Ava’s meddling, Nina will insist that she can take care of it. She won’t want Ava butting in and screwing this up for her. Nina will refuse to let Ava get in the way of mother-daughter bonding, so a showdown may be brewing.

In the meantime, Griffin (Matt Cohen) will also have concerns about Ava. He’ll talk to Kiki (Hayley Erin) about how he’s the real problem. Despite all the revenge drama, Griffin will feel terrible for coming between Ava and Kiki. He’ll hate that he’s torn them apart, but Kiki won’t see it like that. She’ll feel like her mom’s out of control and that’s no one’s fault but Ava’s.