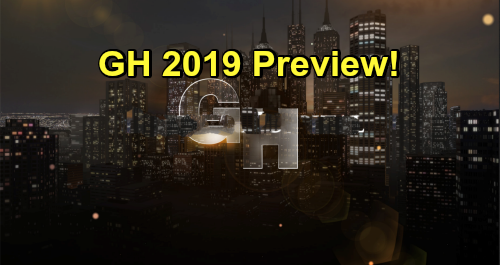 General Hospital (GH) spoilers tease that some huge storylines will heat up in 2019. GH is gearing up for some shocking twists and jaw-dropping moments, so we’ve got a sneak peek of all the action ahead. Here’s a preview of what to expect in the near year.

For starters, we should talk about Jason Morgan (Steve Burton) and Sam McCall (Kelly Monaco). It’s clear that they still have deep feelings for each other, but will they ever take the plunge? General Hospital spoilers hint that a reunion could finally come, but don’t expect it to be easy! Complications will hit for this duo, so Sam and Jason will have to fight for love.

Meanwhile, Julian Jerome’s (William deVry) decision to dump Kim Nero (Tamara Braun) will bring some shakeups. Drew Cain (Billy Miller) and Kim will have to decide what their future looks like. Mysterious Hank (Coby Ryan McLaughlin) will fit in all this eventually. He’ll cause some drama for Drew as well as a couple other links he has to the canvas.

Sonny Corinthos (Maurice Benard) will continue to be drawn to Margaux Dawson (Elizabeth Hendrickson) and Carly Corinthos (Laura Wright) certainly won’t approve. GH fans will see some stunning developments in Sonny and Carly’s love story. Is this couple on the verge of falling apart?

As Mike remains connected to Yvonne Godfrey (Janet Hubert), Stella Henry (Vernee Watson) will do her best to help Marcus Godfrey (Nigel Gibbs). She’ll find herself falling for Marcus again in the process.

Other GH spoilers say Ryan Chamberlain (Jon Lindstrom) will keep up with his murderous goals. The new year will bring more victims and additional opportunities for Ryan to slip up.

Ryan will have to work harder to cover his tracks, especially once Lulu Falconeri (Emme Rylan) puts herself in the middle of the mayhem. Look for Lulu to land in danger thanks to her inquisitive nature.

Laura Collins’ (Genie Francis) mayoral run could become a factor for Ryan. He’ll realize there’ll be more scrutiny if she wins, so he’ll have to find a way to handle that.

Over with Valentin Cassadine (James Patrick Stuart), he’ll live with the fear of his secret getting out. Now that Nina Reeves (Michelle Stafford) is back in Valentin’s life, the stakes are high.

Valentin will hope to keep his bogus daughter scheme under wraps, but what about Nina’s actual daughter? If Sasha Gilmore (Sofia Mattsson) is the real deal, then Nina’s biological child must still be out there somewhere.

General Hospital spoilers say that half heart pendant will be crucial in the new year. Nina will definitely face some bombshells! Of course, Willow Tait (Katelyn MacMullen) will be drawn to the baby she believes is hers.

She’ll connect emotionally with Michael Corinthos (Chad Duell) due to his “Wiley” link. Little do they know that’s not Wiley and Michael’s much more than his godfather.

Brad Cooper’s (Parry Shen) secret could be at risk if Willow tries to inch any closer. As for Willow, her romance with Harrison Chase (Josh Swickard) will heat up, but Michael could cause some speed bumps.

Finally, Kristina Corinthos-Davis (Lexi Ainsworth) will find herself in a troubling situation. The cult she’s joining will lead to family fretting and a crossover with another story or two.