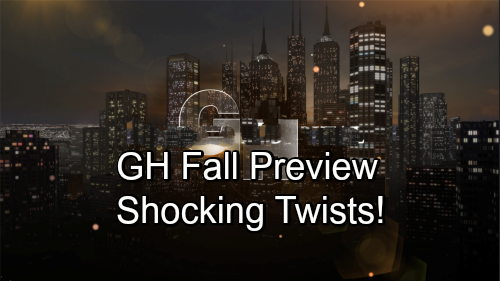 General Hospital (GH) spoilers tease that some exciting episodes are coming up this fall. The ABC soap will deliver stunning storylines, big returns and major twists. GH fans should be on the edge of their seats thanks to what’s in store. We’ve got a fall preview for you, so let’s dive in and explore the shockers ahead.

For starters, Ryan (Jon Lindstrom) will take care of some unfinished business. It sounds like he’ll leave Kevin (Jon Lindstrom) in that padded room and head out into Port Charles. This town has no idea that a threat’s being unleashed! Ryan will prepare to cause chaos, but his plot could hit a huge snag.

General Hospital spoilers say Laura’s (Genie Francis) comeback will leave Ryan with some obstacles. She’ll undoubtedly notice the changes in “Kevin,” so she should do her best to learn more. Naturally, that could put Laura in real peril. Carly (Laura Wright) will continue to be caught up in this Ferncliff story, which means she could be in danger as well.

Meanwhile, Sonny (Maurice Benard) will face more Mike (Max Gail) issues. He’s already been looking at some memory care facilities, but he’s not sure he can send his father to one just yet. However, Mike’s rapid decline could leave Sonny with no choice. He’ll definitely face a juggling act as he worries about Mike and the evidence situation at Charlie’s Pub.

Of course, Sonny’s biggest problem could be DA Margaux Dawson (Elizabeth Hendrickson)! General Hospital spoilers say we’ll learn more about Margaux’s agenda this fall. As many GH viewers suspected, Margaux’s mission is personal. This isn’t just about taking down a notorious mob boss. As secrets in Margaux’s past are revealed, her vendetta against Sonny will slowly begin to make sense.

Julian (William deVry) still wants to expand his pub, but other matters will be the priority. He’ll remain in Brad’s (Parry Shen) corner throughout all the baby drama. It looks like the birth mom will back off, but Brad could be his own worst enemy. His guilt will take a toll, so Julian may have a hard time keeping the new dad’s mouth shut.

Alexis (Nancy Lee Grahn) will bond with Julian again, but is a reunion really in the cards? General Hospital spoilers hint that Julian’s secrets could halt that plan. He’s still with Kim (Tamara Braun) anyway, but she’ll have something besides love on her mind. Oscar’s (Garren Stitt) apparent medical issues could bring Kim closer to Drew (Billy Miller) in the coming months.

General Hospital spoilers say Sam (Kelly Monaco) will take another step toward Jason (Steve Burton), but they’ll have a lot on their plates. Look for some surprising curveballs to shake things up. Over with Curtis (Donnell Turner) and Jordan (Vinessa Antoine), they’ll work on making progress with Stella (Vernee Watson). It’ll take a while, but true peace is possible.

Finn (Michael Easton) and Anna (Finola Hughes) will have a couple mysteries to solve this autumn. Cassandra’s (Jessica Tuck) disappearance will lead to some surprises, but that’s only the beginning. A deeper conundrum will emerge soon enough. There’s a good chance this involves some Cassadine bombshells.

As for Ava (Maura West), her revenge scheme will reach a new low. Griffin (Matt Cohen) and Kiki (Hayley Erin) will wonder if they should be more than friends, so that should fuel Ava’s rage. Franco (Roger Howarth) and Liz (Rebecca Herbst) will also prepare for their wedding this November, but don’t be stunned if they face a crisis beforehand. “Friz” may be tested, so stay tuned for trouble.

That’s it for your fall sneak peek! We’ll give you updates as other GH news comes in. Stick with the ABC soap and don’t forget to check CDL often for the latest General Hospital spoilers, updates and news.