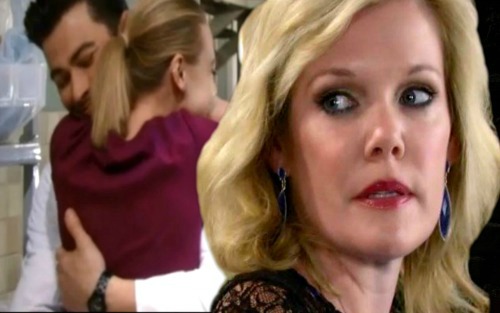 General Hospital (GH) spoilers tease that Kiki (Haley Erin) will face some unsettling moments. Dr. Bensch (James DePaiva) continued his streak of puzzling behavior in Wednesday’s episode. He pushed Kiki to go have some fun at the Nurses Ball, so she doesn’t know what’s up with this guy anymore.

Kiki’s confusion became awkwardness when Dr. Bensch suddenly arrived at the party, too. He’s stalking her at this point, so Kiki will struggle to enjoy herself. General Hospital spoilers say Dr. Bensch will manage to make this situation more uncomfortable soon enough. He might make his move again and leave Kiki deeply disturbed.

Meanwhile, Ava (Maura West) will get ready for her big performance. She’ll take the stage and do a fantastic job, but she may have an unpleasant surprise waiting afterward. Ava will undoubtedly expect this night to be all about her. She’ll want Griffin (Matt Cohen) and Kiki’s compliments, but instead she’ll catch them in a warm embrace.

General Hospital spoilers say Ava will be fed up with their apparent connection. She’ll start a huge fight, which won’t go over well. Ava’s already been on thin ice lately. Griffin didn’t approve of her decision to exploit Mike’s (Max Gail) illness. He understood that Ava wanted to spend time with Avery (Ava and Grace Scarola), but he didn’t approve of her shady tactics.

Griffin and Ava tried to move past that obstacle, but it could come rushing back after Ava’s next accusations. Perhaps Griffin will point out that they have no faith in each other. Without trust as a foundation, how is this relationship supposed to work? General Hospital spoilers state that Ava’s latest round of jealousy will be the last straw. A brutal breakup is on the way.

Ava will be livid with both Griffin and Kiki. She probably won’t be convinced that there’s nothing going on. Ava’s wrong so far, but things could change thanks to this drama. Kiki will be dealing with all her Dr. Bensch issues as well as her mom’s outburst. Griffin will lose the woman he gave up the priesthood for. It’ll be a rough night for both of them, so they’ll decide to bond over their pain.

Griffin and Kiki will throw back plenty of booze, which could lead to some reckless decisions. GH fans know Kiki’s a little out of control when she’s drunk. Griffin may not be able to contain his desires either. Will they cap off the evening with a hot hookup? General Hospital has seemingly been building to this for a while now. Kiki and Griffin deserve a chance at romance!

How do you feel about “GrAva’s” split? Are you on board with Griffin and Kiki being paired up? We’ll give you updates as other GH news comes in. Stay tuned to the ABC soap and don’t forget to check CDL often for the latest General Hospital spoilers, updates and news.