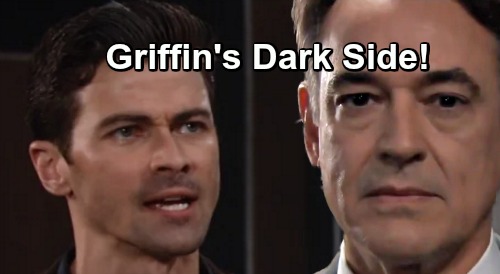 General Hospital (GH) spoilers tease that Griffin’s (Matt Cohen) dark side is already poking through. Every GH character has one deep down and Kiki’s (Hayley Erin) death is bringing Griffin’s to the surface. He thought he had unshakeable faith, but he doesn’t know how to feel anymore. Losing Kiki has hardened Griffin’s heart and that could spell serious trouble for Ryan (Jon Lindstrom) down the road.

GH may be kicking off a somber grief arc for Griffin. He’ll struggle with the loss over the next few weeks, so picking up the pieces of his life will be difficult. The longer Griffin dwells on Kiki’s murder, the more he’ll want her killer to pay. Griffin can’t believe someone as sweet as Kiki could be taken from the world so violently. He’s normally gentle and loving, but this kind of devastation can really change a person.

Based on Griffin’s bitter funeral declaration, he just might find himself embracing his dark side. Without Kiki lighting up his life, Griffin feels like his soul is empty. He may become consumed with catching Kiki’s murderer. That could easily be the only thing that gets Griffin out of bed in the morning.

Of course, Ryan will have to juggle several threats thanks to his choice of victim. Franco (Roger Howarth) and Ava (Maura West) will certainly want justice as well. They’ll be just as riled as Griffin, but at least Ryan knows to keep an eye on them. Griffin could easily slip under Ryan’s radar. This previously mild-mannered doc could be underestimated as Ryan moves forward with other deadly plans.

Jordan (Briana Nicole Henry) and Chase (Josh Swickard) will keep working on the murder mysteries, too. They won’t get very far thanks to “Kevin’s” involvement, but they’ll serve as another distraction. Griffin just might be the one threat that Ryan doesn’t see coming.

Was Griffin’s memorial service shocker significant? Is General Hospital hinting that Griffin will take a sinister turn? It wouldn’t be surprising after what he’s had to endure lately. GH needs a new plan for Griffin anyway, so this would be an interesting route to take.

General Hospital spoilers say someone will catch Ryan and take him down sooner or later. Will Griffin play a major role in making that happen? Would he even be willing to seek deadly revenge? We’ll give you updates as other GH news comes in. Stay tuned to the ABC soap and don’t forget to check CDL often for the latest General Hospital spoilers, updates and news.