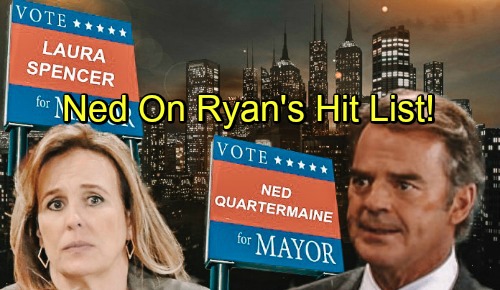 General Hospital (GH) spoilers tease that Ryan’s (Jon Lindstrom) bloodbath is set to kick off soon. He just tracked down Mary Pat (Patricia Bethune) and you can bet it’s not for a friendly visit! Ryan will most likely offer a warning. He may suggest that Mary Pat needs to keep her mouth shut about the mystery patient. “Kevin” will want to make sure their agreement still stands.

Of course, things have changed for Mary Pat. She lost her job and could really use some extra cash. Perhaps Mary Pat will want “Dr. Collins” to share a little of his GH salary. She might think she deserves it for her silence about Ryan, but there’s a twist she’s in the dark on. Mary Pat won’t have a clue that she’s talking to Ryan himself.

Even if Mary Pat doesn’t push for money or favors, she’ll at least enjoy watching “Kevin” squirm. As a result, General Hospital spoilers say Mary Pat may be Ryan’s first victim. It’ll be easier to just get her out of the way than deal with her demands.

Later, Ryan can move on to his next target. Due to his interest in Ava (Maura West) and her desire for revenge, it looks like Kiki (Hayley Erin) will be on Ryan’s hit list. However, General Hospital will surely want more than two victims. There may even be a failed murder at some point. Since this character might be able to identity “Kevin” has his or her attacker, that’d be a great strategy to build suspense.

It’s easy to imagine Ryan going for the kill and having to rush off when someone else arrives. His victim may land in a coma, which would create a tricky situation. Guards would probably be posted thanks to the serial killer panic. That’d make it tough for Ryan to get in this patient’s room and put his secret to death.

Who might be a good option for this scenario? General Hospital spoilers say Ned (Wally Kurth) will get an ominous message next week. Someone will reach out by phone and deliver a creepy threat. Perhaps Ryan will try to provoke some fear due to the mayoral race. He certainly wants Laura to win and stay out of his business.

Would Ryan attempt to kill the competition? It seems extreme, but Ryan’s an extreme guy! He might resort to it, especially if his thirst for blood grows stronger. Serious injuries for Ned would result in a heartbreaking Quartermaine crisis. This would pull a lot of people into a gripping storyline.

Maybe Dillon (Robert Palmer Watkins) could even get back in the mix. Between Kiki and Ned, Dillon would have every reason to resurface. Poor Olivia (Lisa LoCicero) would be a mess along with the rest of Ned’s loved ones. He’d most likely survive, but should GH provide a deadly scare for drama’s sake?

Whatever the case, every Port Charles resident should stay on guard! We’ll give you updates as other GH news comes in. Stick with the ABC soap and don’t forget to check CDL often for the latest General Hospital spoilers, updates and news.