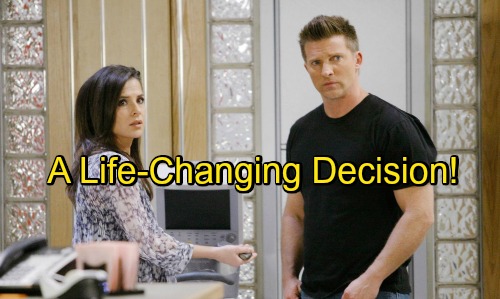 General Hospital (GH) spoilers say Jason (Steve Burton) will be glad to hear that Peter’s (Wes Ramsey) been found. He’s got a lot on his plate right now thanks to Carly’s (Laura Wright) Ferncliff nightmare and Michael’s (Chad Duell) dangerous plot. Of course, Jason is also supporting Sonny (Maurice Benard) through all the drama with Mike (Max Gail) and the evidence under Charlie’s Pub.

In other words, Peter hasn’t exactly been a big concern. Nevertheless, Jason will breathe a sigh of relief once Peter’s back in custody. Whether Peter gets punished or not, Jason will feel a sense of closure. He’ll believe it’s time to put the nightmare he endured behind him. Peter held Jason captive for five years, but what matters now is Jason’s back with the people he loves.

Of course, resuming life as a dad has been an adjustment. Danny (T.K. Weaver) was open to connecting right off the bat, but it’s taking a little more work to win over Jake (Hudson West). Thankfully, Jason’s making real progress. Despite the canceled baseball game, he still had a nice chat with his son. Jason and Jake even played some catch, so that was a great day of bonding.

Jason will resolve to do more of that from now on. He’ll want to be a true family man and become someone his kids can count on. Jason will admit that during an upcoming chat with Sam (Kelly Monaco). He’ll hope he can play a bigger role in Danny’s life. Jason missed a lot while he was in captivity, so he’ll want to step up and be a good father.

General Hospital spoilers say Sam will be excited as well as afraid. She’ll know that as Jason gets closer to Danny, he’s inevitably going to get closer to her, too. That’s what Sam wants deep down, but the thought of it actually happening will still be scary. Love can certainly be a bit terrifying at times!

Nevertheless, GH fans can expect Sam to get on board. She’ll decide she has to be brave and let her guard down. Could this be the first step toward a real “JaSam” reunion? General Hospital spoilers hint that Sam and Jason have quite a journey ahead of them, but they should love every minute of it.

It sounds like some Jason and Sam fans will be happy as this storyline continues to develop. We’ll give you updates as other GH news comes in. Stay tuned to the ABC soap and don’t forget to check CDL often for the latest General Hospital spoilers, updates and news.