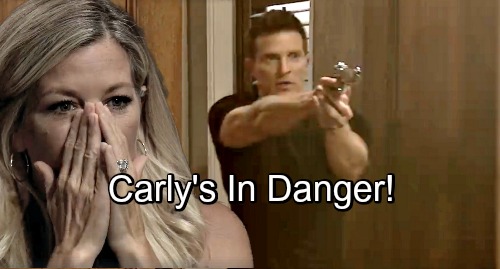 General Hospital spoilers tease that Jason’s (Steve Burton) attention will soon turn back to Carly (Laura Wright). Jason has been pulled away from Carly since he risked everything to bust her out of Ferncliff, where she was tormented by the evil Mary Pat (Patricia Bethune) and nearly given electroconvulsive therapy by Dr. Lasiris (Casey Biggs).

Lately, Jason’s been busy with Sonny (Maurice Benard), trying to prevent Julian (William deVry) from finding the body that Mike (Max Gail) hid under Charlie’s Pub. He’s also been keeping an eye on Margeaux (Elizabeth Hendrickson), who seems to pose a risk to not only Sonny, but to Drew (Billy Miller) as well. Jason definitely looks out for the people he cares about.

But Jason’s most protective of Carly, his best friend in the world. Jason loves Carly unconditionally and will do anything for her, and he tends to keep a watchful eye on what’s going on around her. General Hospital spoilers say that Jason’s concern for Carly will soon intensify. It seems that he’ll find himself worrying about his bestie once again.

What’s going to happen with Carly that will cause Jason so much concern? It may have something to do with Kevin (Jon Lindstrom), who seems to really want Carly to return to therapy. Carly turned Kevin down flat when he suggested that they continue the therapy sessions they began at Ferncliff, but he may be back to lobby for therapy once more.

Chances are, Kevin will be back in Carly’s orbit, and he may be up to no good. Of course, viewers know that Kevin may actually be Ryan (Jon Lindstrom) masquerading as Kevin while the real Kevin is locked up against his will at Ferncliff. If that’s indeed the case, then Carly may be in grave danger from Ryan.

Even though Carly doesn’t realize it, she could bust Ryan’s scheme wide open. Carly knows that there was a mystery patient under duress in the room next to her at Ferncliff, and she thought she saw a patient who looked like “Kevin” while she was under heavy sedation.

Ryan will probably want to keep tabs on Carly to make sure she doesn’t put two and two together and figure out who the mystery patient is. And if Carly does start to figure it out, Ryan might do her harm. Carly could even wind up back in Ferncliff, as another of Ryan’s prisoners!

Of course, Jason doesn’t know about the Kevin/Ryan switch, but he will likely sense that something’s up if “Kevin” starts spending a lot of time around Carly and isn’t acting quite right. Jason can keenly sense trouble, especially where Carly is concerned.

Do you think Carly’s in real danger, and will Jason figure out what’s going on in time to save her from more Ferncliff-like drama? Stay tuned to the ABC soap and don’t forget to check CDL often for the latest General Hospital spoilers, updates, and news.