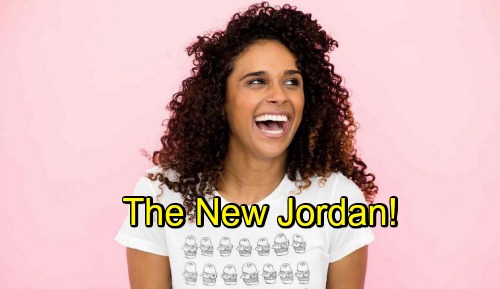 General Hospital (GH) spoilers tease that the ABC soap has found their new Jordan Ashford and she is a The Young and the Restless alum. Vinessa Antoine recently announced her departure from the role she’s played since 2014. She’s moving on to a Canadian primetime series called Diggstown, but GH opted to recast Jordan instead of writing her out.

That prompted a search for just the right gal, so now there’s good news to report. Briana Nicole Henry has been chosen as the new Jordan and will be filming her first scenes this month. Recasts often take some getting used to, but they’re the norm on daytime dramas. General Hospital has had several major exits lately, so it makes sense that they want to keep this character on canvas.

It’s worth mentioning that trouble’s brewing for Jordan and Curtis (Donnell Turner) right now. Thanks to Stella (Vernee Watson), Chandra is back on Curtis’ radar. Jordan seemed jealous over the message on Curtis’ phone, but he tried to shut down any doubts about their relationship.

Unfortunately, the peace won’t last. Jordan will feel the sting of betrayal soon, which could mean the “Jurtis” wedding is in jeopardy. General Hospital spoilers say some fierce fights are on the way. GH might want to break Jordan and Curtis up before the recast comes into the picture.

It’d be jarring if the new Jordan was just plopped in in Curtis’ bed. By making them find their way back to each other with Henry in the role, fans may have time to accept her. Henry might have a chance to make the part her own before viewers start complaining.

Henry actually has soap experience, so that should come in handy during her GH stint. She played Esmeralda from 2013-2014 on The Young and the Restless. Esmeralda wasn’t a crucial character, but she did have a brief romance with Y&R’s Devon (Bryton James).

Henry has also appeared on Undateable, Jane the Virgin, Shameless, Insecure and more. Let’s hope she’ll be a great fit at GH! Henry undoubtedly tested with Donnell Turner, so General Hospital must have confidence in their chemistry. It should be interesting to see what Henry brings to the table.

What do you think about Briana Nicole Henry’s hiring? Do you think she’s a solid recast choice? We’ll give you updates as other GH details emerge. Stay tuned to the ABC soap and don’t forget to check CDL often for the latest General Hospital spoilers, updates and news.