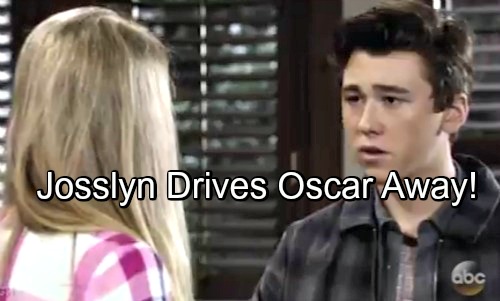 General Hospital (GH) spoilers tease that Oscar (Garren Stitt) and Josslyn (Eden McCoy) will continue to face conflict. Joss was ready to have sex recently, but Oscar quickly pulled back. He knows Josslyn has serious family drama going on, so he didn’t want to rush into anything.

Joss could regret their first time if they jumped the gun. These teens still have a lot of growing up to do, so Oscar’s wise to hold off on this. He’s mature for his age, but Josslyn isn’t keen on behaving responsibly. She’s feeling reckless these days, which could spell trouble for her romance with Oscar.

During their last fight, Oscar suggested that Joss was acting crazy. That really set her off thanks to Carly’s (Laura Wright) Ferncliff nightmare, but he wasn’t wrong. Josslyn seems more like her impulsive mother every day! She’s turning into a mini Carly, so Oscar’s going to have a hard time handling the chaos.

Sonny (Maurice Benard) is a force to be reckoned with, which is why he’s a good match for Carly the firecracker. He isn’t scared off when Carly does something irresponsible or downright dumb. It was a terrible idea to break out of Ferncliff and crash Michael’s (Chad Duell) wedding to Nelle (Chloe Lanier). However, Sonny can understand Carly’s frustration and motives. Now he wants to clean up her mess.

Oscar cares about Josslyn, but he may not have the same patience as Sonny. Then again, Joss could become the impatient one! There’s a teen heartthrob waiting across town, so it’s only a matter of time until she drifts in his direction. General Hospital brought in a Cameron (Cade McWatt) recast for a reason and this is it. The first phase of a love triangle is already in motion.

Cam could probably deal with Josslyn’s Carly-ish outbursts. He also seems like the kind of guy who’d welcome sex. Will Josslyn break things off with Oscar to move on with Cameron or will she just cheat instead? A GH betrayal would be the more exciting option.