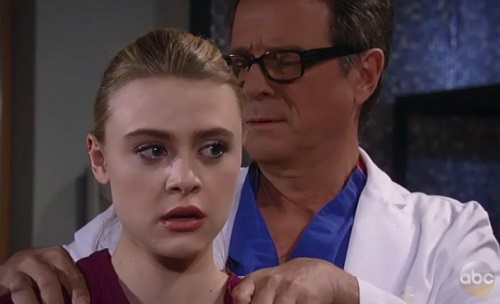 General Hospital (GH) spoilers reveal that Kiki (Haley Erin) is ignoring warning signs and heading straight into trouble. When she got her shadowing assignment, Kiki wasn’t pleased to see the first doctor she’ll be observing. Naturally, it’s going to be Dr. Bensch (James DePaiva). He planted a kiss on her recently, so she’s not thrilled about being so close to him for the next few weeks.

Dr. Bensch claims he had nothing to do with Kiki’s schedule, but who is he kidding? The stalker doc obviously set this up. Nevertheless, Kiki doesn’t want to throw away this opportunity. The shadow program is a big deal, so she intends to grin and bear it. Unfortunately, this seems like a disaster waiting to happen. Dr. Bensch must have a goal in mind and you can bet it’s not a good one.

Kiki will hope that Dr. Bensch can honor their agreement. He promised he’d stick with a strictly professional relationship, but there’s no way this creep will keep his end of the bargain. Dr. Bensch will inevitably cross the line again. It’s just a matter of when, where and how far he’ll go. 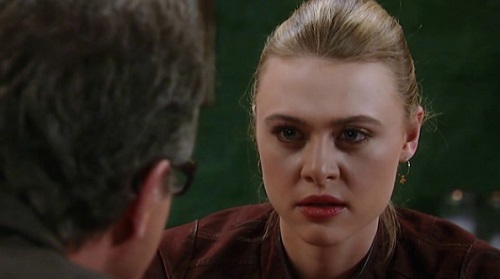 Since GH already showed us a lip lock, they’ll probably have to up the ante next time. Dr. Bensch may feel like he has the upper hand, so the situation could rapidly escalate. He might lull Kiki into a false sense of security before securing another meeting with her. Dr. Bensch could try to force himself on Kiki once he has her cornered.

Of course, there could be some added pressure here. Dr. Bensch could play that voicemail Kiki left him and argue that he’ll take her down if she doesn’t give him what he wants. He could twist things around and suggest that he’ll tell the board she made the first move.

Dr. Bensch might threaten to derail Kiki’s career. He could suggest that she’ll never practice medicine by the time he’s through with her. If Kiki still doesn’t cave in, Dr. Bensch could easily rape her anyway. However, it seems like General Hospital is inserting Griffin (Matt Cohen) in this storyline. Dr. Bensch looked somewhat jealous as he spied Kiki and Griffin’s hug.

Since GH is making Griffin a plot element, perhaps he’ll be the one to save the day. It’d be great to see Griffin come to Kiki’s rescue. Maybe he’ll even punch Dr. Bensch’s lights out! Could this kick off a new romance for Kiki and Griffin? It’s an intriguing option to consider, especially since it would complicate Ava (Maura West) and Kiki’s relationship.

WATCH: Sam helps Jason break down all of his leads in the search for Henrik… before all hell breaks loose. #GH55 pic.twitter.com/jDgHHOiro1