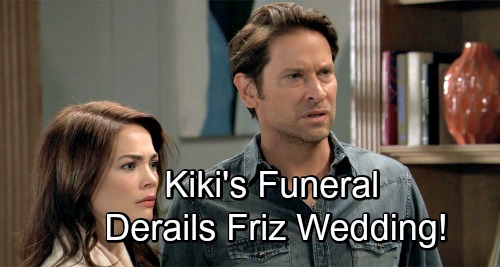 General Hospital (GH) spoilers tease that Liz (Rebecca Herbst) and Franco (Roger Howarth) will have to make a big decision. Their wedding was already postponed once thanks to an earthquake and some Jim Harvey (Greg Evigan) drama, so Franco and Liz were hoping to truly tie the knot this time. Their ceremony was set to kick off soon, but Kiki’s (Hayley Erin) murder will force a change of plans.

For starters, Liz and Franco won’t really be in the mood to celebrate. A wedding is supposed to be a blissful experience, but they’re feeling everything except joy right now. Franco viewed Kiki as his daughter, so his heart is really hurting right now. Liz has also lost a great friend and coworker. They just won’t feel right about throwing a party for any reason.

However, the bigger reason will involve Kiki’s funeral. Franco and Liz will realize their nuptials could overlap with the memorial service. There’s no way they could miss paying their final respects and saying goodbye. They wouldn’t want to make guests choose either. Liz and Franco will just avoid the tricky situation entirely by putting the wedding off once again.

It’s probably for the best since they’ve been so stressed out about Aiden (Jason David) anyway. It’ll be better to handle the boy’s bullying issues before they lock in their family. Of course, another wedding delay will probably leave some “Friz” fans concerned. Since this isn’t the first time Franco and Liz have postponed, does that mean marriage just isn’t in the cards? Is relationship trouble brewing?

Thankfully, General Hospital spoilers say Franco and Liz will get through this string of shockers. They’ll overcome any other bombshells that might be ahead as well. In an interview with Soap Opera Digest, one of GH’s co-head writers weighed in on what’s next for “Friz.” Shelly Altman wanted to set the record straight about where Liz and Franco will go from here.

This move makes sense considering Jordan (Briana Nicole Henry) and Curtis (Donnell Turner) just tied the knot. There’s no need to do a wedding overload, so GH might as well wait. After the Ryan (Jon Lindstrom) drama dies down and Kiki gets justice, Franco and Liz can focus on some happiness.