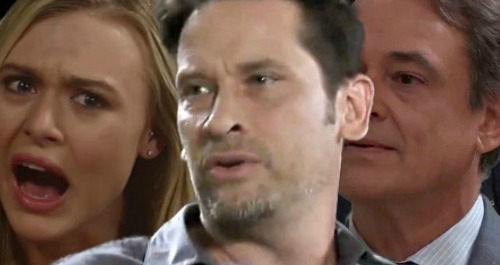 General Hospital (GH) spoilers tease that Kiki’s (Hayley Erin) demise will bring shock and outrage for those who were closest to her. However, there’s one person who just might take this death the worst – at least in a sense of how he reacts. Franco (Roger Howarth) has a dark side and it could easily come roaring back thanks to the news of Kiki’s brutal murder.

Although Franco’s killing spree was caused by his tumor, he’s always been a tortured soul. Franco has proven that he can be pushed to the limit. He had some intense confrontations with Jim Harvey (Greg Evigan) a while back. There was also a shocking moment with Dr. Bensch (James DePaiva) not too long ago. We saw a glimpse of dark Franco as he stepped up to protect Kiki.

Franco thinks of Kiki as a daughter, so he’s going to be drowning in grief soon. His anger will run deep as he ponders who could’ve stooped so low. Kiki was a bright med student with her whole life ahead of her. She was joyful, friendly and just someone that most people enjoyed spending time with.

Franco won’t be able to fathom how somebody could just snatch Kiki away like this. He’ll become consumed with making the culprit pay. General Hospital spoilers say Liz (Rebecca Herbst) will be rattled as Franco obsesses. She’ll be hurting as well, but she’ll undoubtedly think his reaction is a little over the top.

Liz may push Franco to settle down and focus on what’s good in his life. He’s great with her boys and wants to be a positive role model for them. Liz won’t want Franco to lose sight of his goals, but he most likely will. Those goals will be replaced by one that’s overwhelming and urgent. General Hospital spoilers say Franco will desperately want revenge!

Franco already told “Kevin” aka Ryan (Jon Lindstrom) that he was the perfect person to find the murderer. Of course, “Kevin” urged Franco to stay on the right path and concentrate on his recovery. GH fans know Ryan didn’t want Franco getting too close to his secret.

Franco probably would’ve followed that advice that if it hadn’t been for Kiki’s murder. This homicide will renew Franco’s determination to solve the case. He won’t rest until he avenges Kiki’s death, so Ryan may be in trouble. Can a killer catch a killer? Franco just might figure out “Kevin” is to blame. If so, will Franco turn this monster over to the cops or take matters into his own deadly hands?

Ryan had better be prepared for serious complications. We’ll give you updates as other GH details emerge. Stay tuned to the ABC soap and don’t forget to check CDL often for the latest General Hospital spoilers, updates and news.