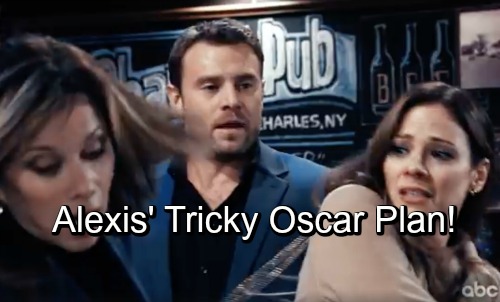 General Hospital (GH) spoilers tease that Kim (Tamara Braun) and Drew (Billy Miller) are going to be shocked by Oscar’s (Garren Stitt) decision to seek emancipation from them. Kim and Drew are insistent that Oscar is going to join a clinical trial to treat his inoperable brain tumor, but Oscar has different ideas. He doesn’t want to live out his final days as a patient getting a risky treatment that could itself kill him.

So, Oscar will drop the bomb on his parents that he’s going to seek emancipation so he can make his own treatment decisions without their permission. Kim and Drew will be horrified by this turn of events. To them, they’re Oscar’s parents and they naturally assumed that the decision-making was in their hands and that Oscar would just have to live with their decisions.

Kim and Drew will also be livid with Alexis (Nancy Lee Grahn), who will agree to represent Oscar. Alexis wasn’t sure if she wanted to take the case or not, but ultimately she’ll decide to do it, much to the horror of Kim and Drew. They’ll feel betrayed and think that Alexis, as a parent herself, shouldn’t be doing this to other parents.

But Alexis will forge ahead as Oscar’s lawyer, despite having some serious reservations about the case. In fact, GH spoilers indicate that Alexis may have an ulterior motive for taking the case. Alexis initially told Oscar that he was better off working things out with his parents on his own, but Oscar refused to do so and threatened to seek representation from Scotty (Kin Shriner). Alexis cautioned Oscar not to do that, so maybe Alexis thinks that by taking Oscar’s case, she can help him to change his mind.

Perhaps Alexis will work behind the scenes on Oscar to get him to drop the lawsuit. Or maybe she’ll hope that Julian (William deVry) can work on Kim to get her to see that Oscar’s point of view about the clinical trial is a valid one. Whatever Alexis does, it looks like she’s going to really try to reunite Oscar and his parents, which would be great to see.

Do you think Alexis will be able to bring Oscar and his parents together? Stay tuned to the ABC soap and don’t forget to check CDL often for the latest General Hospital spoilers, updates, and news.