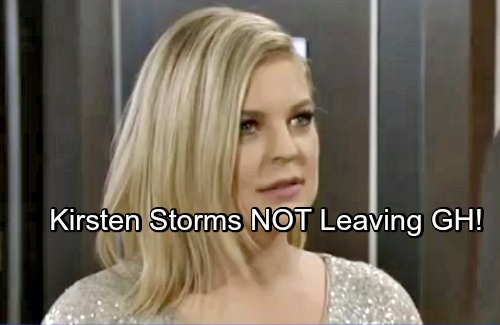 UPDATE: Kirsten Storms is NOT leaving General Hospital for personal reasons. We apologize for any misunderstanding. The original SID article was published in March 2017 and updated recently leading to this confusion.

General Hospital (GH) spoilers tease that Kirsten Storms intends on taking another breather from the role of Maxie. According to the new issue of ABC Soaps in Depth, Storms is stepping away for personal reasons. Fortunately, this isn’t a permanent departure. A show rep insisted that Storms will return and added that her status with the show hasn’t changed.

The fact that Maxie will indeed come back is great news for her fans. Of course, there’s no word yet on when that return might happen. Storms’ break could be for weeks or months. At this point, she may not even know for sure how long she’ll be out. General Hospital is staying tight-lipped for now, so we’ll just have to keep watching and waiting for confirmation on Storms’ comeback.

This isn’t the first time Storms has put Port Charles on pause. GH seems quite accommodating when it comes to their cast members’ need for breaks. However, they have a unique approach to handling them. The other soaps tend to work around situations like this by sending characters off canvas. It appears they’ve mostly ditched the days of temporary recasts.

General Hospital doesn’t seem to mind if there’s a crucial need for the character. It’s undoubtedly a story-dictated decision. Maxie took a job out of town during Storms’ last breather, but GH has opted for recasts during previous breaks. Molly Burnett and Jen Lilley have filled in for Storms on separate occasions.

What will the ABC soap do this time around? Let’s consider what’s happening in PC and try to figure it out. General Hospital spoilers say Maxie will give birth to her baby next week. There may be a baby switch brewing since Nelle’s (Chloe Lanier) kid could come around the same time. We also know that Peter (Wes Ramsey) will be exposed as Heinrik soon. That should be quite a blow for poor Maxie.

Based on the storyline, GH would have an easy out. Maxie could simply take her new bundle of joy to spend time with Georgie. Spinelli (Bradford Anderson) could support Maxie as she continues to cope with Nathan’s (Ryan Paevey) death and Peter’s betrayal.

If there’s a baby swap, it would take some time for that to be revealed. In fact, having Maxie off canvas could really work for that plot. It would make it that much harder for anyone to learn the truth. If Nelle’s swapper, she could get by with her scheme for quite a while.

How do you feel about Kirsten Storms’ exit? Are you glad Maxie will eventually be back? We’ll give you updates as other info comes in. Stick with ABC’s GH and don’t forget to check CDL often for the latest General Hospital spoilers, updates and news.