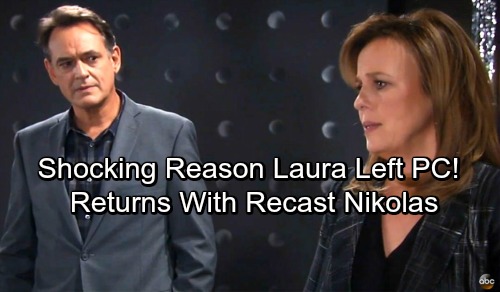 General Hospital (GH) spoilers recently revealed that Genie Francis, who portrays Laura Collins has been bumped to recurring status. GH fans learn Laura, who has been dead set on becoming Mayor of her beloved Port Charles in an attempt to save her beautiful historical town from nasty land developer, Jim Harvey (Greg Evigan) and Ned Quartermaine (Wally Kurth) who want to turn it into a fast-paced, faceless city.

On the turn of a dime, Laura drops out of the Mayoral race, informs her newlywed husband, Dr. Kevin Collins (Jon Lindstrom) that she is packing up and leaving town for at least 6 weeks to be with her grandson, Spencer Cassadine (Nicolas Bechtel) who has apparently broken both his legs!

Laura says she is not bringing Spencer to Port Charles because of Valentin Cassadine (James Patrick Stuart), but GH viewers smell a rat, and rightly so. Laura is adamant that Kevin stay in Port Charles, but why? GH buzz is that Laura is not tending to Spencer, but is going to be with Spencer and her son, Nikolas (last played by Nick Stabile).

Laura is pushing Kevin to remain in Port Charles, using the excuse that his patients need him, but fans will recall that she didn’t worry about his patients when she was in desperate need of his help, after Helena Cassadine (Constance Towers) left her only a book of clues to figure out.

Laura needs Kevin to stay away, even telling him to run for Mayor to keep all his time occupied. Kevin has always been there for Spencer, why would he stay away from him now when he is the only adult, male figure he supposedly has left?

General Hospital spoilers reveal that all the signs are pointing to a Nikolas return. When he “died” in July, 2016, although Ava Jerome (Maura West) saw him get shot and fall out the window, there was no body recovered which always leaves the possibility of a return one day. Nicolas Bechtel, who left in June 2017, posted on his Twitter account that he was “Blessed with the most awesome TV family” and “See you next summer.”

Summer sweeps are approaching quickly (June 28-July 25), and with all these clues around us, could Laura be bringing home a re-cast of Nikolas with the his much loved and deeply missed son, Spencer? Be sure to tune into ABC’s General Hospital (GH) to catch up on everything happening right now in Port Charles. Check CDL General Hospital spoilers often for updates, news, spoilers!