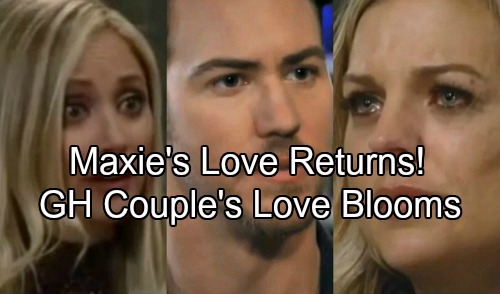 General Hospital (GH) spoilers tease that Maxie Jones (Kirsten Storms) will be torn between her head and her heart. She was livid with Peter August (Wes Ramsey) for deceiving her about his true identity. If Peter had been honest, Nathan West (Ryan Paevey) might’ve survived his father’s wrath. These brothers could’ve teamed up to take Cesar Faison (Anders Hove) down together.

Unfortunately, Maxie’s beloved hubby is dead and part of her blames Peter for that. She’s still in pain, but what about her feelings for Peter? It’s clear that Maxie was starting to fall for him. She can’t just turn off a switch and make herself not care.

Maxie was moved to tears during Molly Burnett’s time as a temporary recast. Although Maxie claimed she didn’t buy the apology, the waterworks suggested otherwise. Right now, Maxie believes Peter’s just on the run. How will she feel when she realizes Peter’s actually been kidnapped?

General Hospital spoilers say Maxie’s feelings should come rushing to the surface. She won’t be able to hide her concern for her former friend. Maxie will undoubtedly reflect on all the special moments they shared. Peter was a real friend after Nathan’s death and he even delivered Maxie’s baby. She wants to believe it was all some act, but she can tell Peter had at least a little good in him.

Soap characters tend to be awfully forgiving in these types of situations. It probably won’t be long until Maxie’s opening her heart again. They’ll have to reestablish trust, but they should resume their friendship. Could they become lovers, too? It’s a reasonable step since GH spent so much time helping them bond.

In the weeks leading up to the Heinrik shocker, Maxie was seemingly trying to deny their romantic connection. It hasn’t been that long since Maxie lost Nathan, so she didn’t want to feel like she was betraying him. Instead, Maxie simply told herself Peter was a close pal.

However, GH fans know better! They were obviously on the verge of a relationship before the big blowup. Maybe they can get that romance back on track eventually. General Hospital spoilers say the dire search for Peter will bring troubling times for Maxie. She may realize just how much Peter means to her. In some ways, this abduction could work in Peter’s favor.

It’s possible Peter has an obsession with the one Faison had with Anna Devane (Finola Hughes). Nevertheless, this appears to be a genuine connection between two souls. Peter and Maxie care deeply for each other, so they still have a shot at making it work.

Are you rooting for these two as a hot GH couple? Should Maxie forgive Peter and let love bloom? We’ll give you updates as other General Hospital news comes in. Stick with the ABC soap and don’t forget to check CDL often for the latest General Hospital spoilers, updates and news.