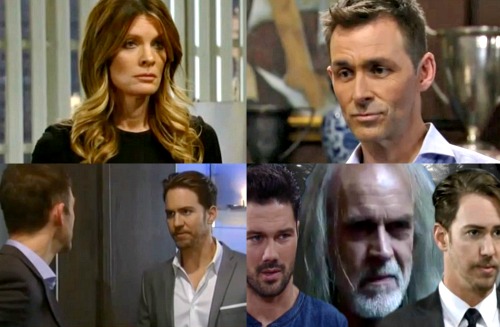 General Hospital (GH) spoilers tease that big trouble’s looming in Valentin (James Patrick Stuart) and Nina’s (Michelle Stafford) relationship. They’ve already been at odds over Nina’s suspicions, but things are really going to explode down the road. Once Valentin’s deception is revealed, it’ll truly put their marriage to the test. Nina will have to decide how much she’s willing to get past!

In a new interview with Soap Opera Digest, Stafford dished on all the GH drama. She suggested that Valentin’s making things worse for himself by letting this drag on. Stafford said, “I don’t think what Valentin has done so far is necessarily bad, you know? He’s basically just being Peter’s (Wes Ramsey) confidant. But he is just making a big mess by not coming clean with her.”

Of course, Nina may take a harsher stance than Stafford! We can’t forget that Peter played a role in summoning Faison (Anders Hove) to Port Charles. Peter fully expected to see Faison the day Nathan (Ryan Paevey) died and that’s why he was wearing a bulletproof vest. Poor Nathan didn’t have all the facts and was ultimately blindsided by a bullet. His shocking death really hit Nina hard.

Plus, Peter’s real last name alone should spark outrage. His Faison ties will certainly leave Nina fuming. She hates Peter’s father with a passion, so she may think Faison’s son is just as bad. You can bet that Nina will give Valentin an earful for his partnership with Peter. General Hospital spoilers say the worst part will be the lying he’s been doing for months.

Nina is also quite protective of Maxie (Kirsten Storms), so she’ll hate that Peter’s been duping her. She’ll feel like Valentin could’ve prevented more heartache. Stafford eventually admitted that Nina should “lose her s—t,” so she can tell that this is going to get ugly.

Valentin’s deception has caused problems in his marriage before, but they were able to overcome the obstacles. Can Nina and Valentin do the same this time? It’s possible, but you can bet that Valentin will have to work hard at it. Nina won’t get over this easily, so Valentin will just have to suffer and hope for the best.

It sounds like some great material’s on the way. We’ll give you updates as other General Hospital news comes in. Stay tuned to ABC’s GH and don’t forget to check CDL often for the latest General Hospital spoilers, updates and news.