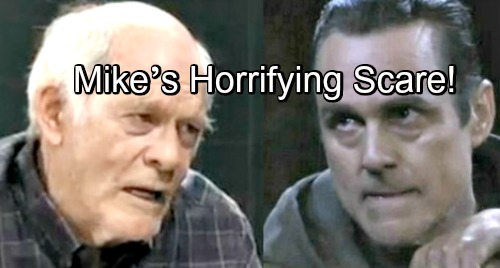 Nevertheless, General Hospital is certainly giving us some great performances along the way. Gail’s been knocking it out of the park and so have his costars. They’ll continue to tell this story of touching moments and devastating drama.

General Hospital spoilers say Mike will have a serious scare on this week’s new GH episodes, August 20-24. Something will happen that leaves his family terrified. GH fans will recall that Mike’s had several major incidents. There was the time he thought Avery (Ava and Grace Scarola) was Courtney and accidentally kidnapped her. That led to Ava getting custody of the tot, so that’s one incident that Sonny regrets.

Mike faced another shocker recently when he tumbled just outside the house. He had to get some stitches above his eye, but it could’ve been a lot worse. Mike’s even having a hard time remembering where his room is lately. It’s clear that Sonny needs to take a closer look at some facilities, but he can’t bring himself to take Mike out of his home just yet.

Will Mike’s next incident change Sonny’s mind? Time will tell, but it sounds like Sonny will definitely be on edge. There’s no word yet on what’ll happen to Mike this week, but it could force Sonny to make some tough choices. General Hospital viewers will be anxious to see how it all plays out.

Frank Valentini, GH’s executive producer, opened up about Mike’s storyline in an interview with Michael Fairman. He’s committed to making sure they handle this correctly. “The Alzheimer’s story is very near and dear to all of our hearts,” Valentini said. “We want to tell it in a way that is very realistic, but to also emphasis the hope and the family connection, and the love that is that family.”

General Hospital has been pulling that off so far. Despite the heavy subject matter, we’ve seen some happiness amidst the sorrow. “Sometimes in the face of tragedy, it brings out the best in human beings,” Valentini said. “There is something very uplifting about that, even though we are telling a very sad story.”

Unfortunately, that story will only get sadder as time goes on. Mike’s marching toward a deadly outcome down the road, so that’ll be another crushing blow for the Corinthos family. We’ll give you updates as other GH news comes in. Stay tuned to the ABC soap and don’t forget to check CDL often for the latest General Hospital spoilers, updates and news.