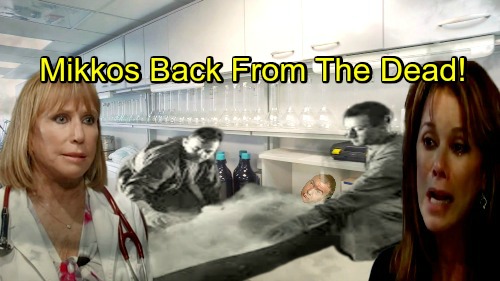 General Hospital (GH) spoilers tease that there’s more to Alexis Davis’ (Nancy Lee Grahn) curiosity than means the eye. GH viewers know Alexis suddenly wants to find out more about her father, Mikkos Cassadine (John Colicos). She now realizes her daddy issues are the reason she gravitates toward men who hurt her.

Valentin (James Patrick Stuart) delivered an envelope containing info on Mikkos, which brought some conflicted feelings for Alexis. She gets that she could be opening up a can of worms, but she’s undoubtedly interested in the contents. Alexis nearly destroyed the envelope, but she hesitated after striking the match. What buried secrets are lurking within the Cassadine family?

Longtime General Hospital fans will remember Mikkos, who hasn’t been seen onscreen since the early 1980s. He was an integral part of the “Ice Princess” storyline, which involved a weather machine made with a large diamond. Mikkos wanted to use this machine to freeze the world, but that plan obviously didn’t pan out.

Mikkos supposedly died in a fight with Luke Spencer (Anthony Geary). He was pushed into the freezer of the ice machine and that was that. However, a Mikkos comeback could be brewing. Will he return from the dead and bring some soapy fallout?

It could be significant that Mikkos’ fate involved the ice machine freezer. This seems to involve a similar form of technology as stasis, which has trapped many GH characters. For example, there was a stasis storyline several years ago involving Helena Cassadine (Constance Towers), Stavros Cassadine (Robert Kelker-Kelly) and Lulu Falconeri (Emme Rylan).

When Luke and Laura went to rescue Lulu, Stavros was shoved into a freezing chamber. It’s worth mentioning that Sam Cain (Kelly Monaco) – or McCall as she now prefers – dropped Luke’s name in her conversation with Alexis. She thinks he’d be a better source of Mikkos history than Valentin.

Liv Jerome (Tonja Walker) also held Griffin Munro (Matt Cohen) captive in the sub-basement of GH last year. This sub-basement was Helena’s old lab. It’s possible Valentin discovered that Mikkos isn’t truly dead, but in stasis. If so, Helena may have rescued Mikkos and put him in her old lab under General Hospital.

Valentin may have offered a big clue when he said more information would follow after it was UNEARTHED! The envelope he delivered could reveal that Mikkos is on ice under GH. General Hospital spoilers say Alexis will be completely shocked soon enough. She’ll discover something that’ll convince her to confront Monica Quartermaine (temporarily being played by Patty MacCormick).

Monica might’ve discovered Mikkos and the stasis chamber after a post-earthquake inspection. Like Valentin, Monica probably would’ve wanted to let sleeping dogs lie. Whether Monica has all the facts or not, Alexis may learn the truth and assume the head of the hospital would be in the loop.

GH watchers will definitely see a faceoff between Monica and Alexis. Will Mikkos and a stasis discovery be the source of their conflict? We’ll give you updates as other news comes in. Stay tuned to the ABC soap and don’t forget to check CDL often for the latest General Hospital spoilers, updates and news.