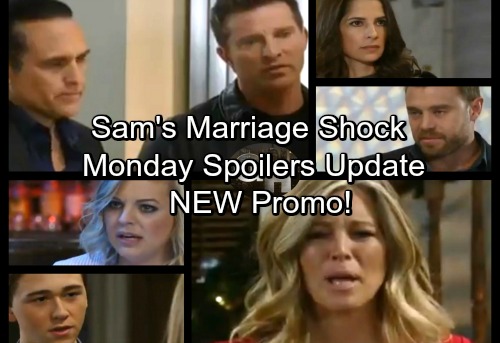 General Hospital (GH) spoilers for Monday, January 8, tease that Drew (Billy Miller) and Sam (Kelly Monaco) will get some bad news. They’ll discover that Sam’s still legally married to Jason (Steve Burton), so their wedding plans will have to wait. Sam will vow to get a divorce ASAP, but that’ll come with some difficulties as well. Drew and Sam have certainly been facing a string of bad luck.

Meanwhile, Jason and Sonny (Maurice Benard) will mull over everything they learned from Spinelli (Bradford Anderson). They’ll track down Anna (Finola Hughes) to see if she might be able to help. Jason will point out that the manuscript writer is Faison’s (Anders Hove) son. He’ll hope Anna can assist with identifying this mystery man, but Peter’s (Wes Ramsey) probably the person they’re looking for. 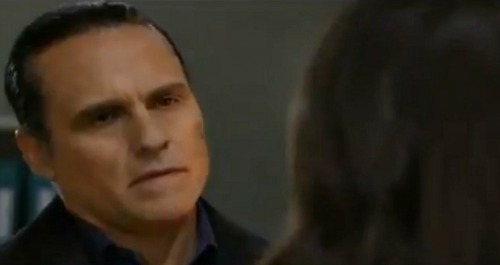 Anna will pitch in if she can, but she’ll be busy with Finn (Michael Easton) first. They need to get an intense chat out of the way. General Hospital spoilers state that Finn will make another confession. He’ll suggest that it’s time to tell the truth.

Finn’s not great about sharing his feelings, but his latest ordeal has changed him. Now Finn’s prepared to be honest, so a love declaration may be brewing. He’s already alluded to his feelings, but it never hurts to spell it out when hearts are involved. 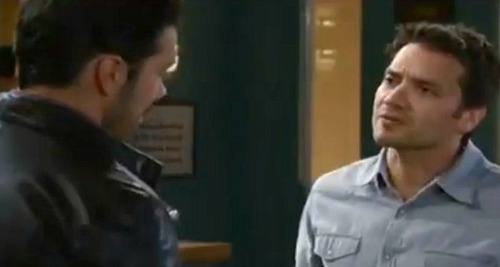 Other GH spoilers say Dante (Dominic Zamprogna) will get a shock. He’ll find out that Faison is Nathan’s dad. Once Nathan comes clean, he’ll talk about his concerns. Dante will do his best to help Nathan handle the drama. He’ll have some sympathy since Faison’s pretty much the worst father Nathan could end up with.

Across town, Lulu (Emme Rylan) will try to be there for Maxie (Kirsten Storms). The ladies will discuss the threat and what this means for “Naxie’s” kid. Maxie will fear that their son or daughter will have evil genes. With a grandfather like Faison, Maxie’s expecting the worst.

Of course, Nathan turned out just fine. The revelation was a big deal, but Maxie’s baby is perfectly innocent. There’s no need to assume he or she is a monster just yet. Elsewhere, Carly (Laura Wright) will worry about her own baby – who happens to be a teenager now. The older Josslyn (Eden McCoy) gets, the more Carly will fret. Joss is growing up and that means typical teen issues are in her future.

Oscar (Garren Stitt) will have something on his mind in Monday’s episode. It looks like Josslyn will disagree, so a tiff’s coming up. Fortunately, they should work it out sooner or later. This sweet romance is far from over. We’ll give you updates as other General Hospital details emerge. Stick with ABC’s GH and don’t forget to check CDL often for the latest General Hospital spoilers, update and news.