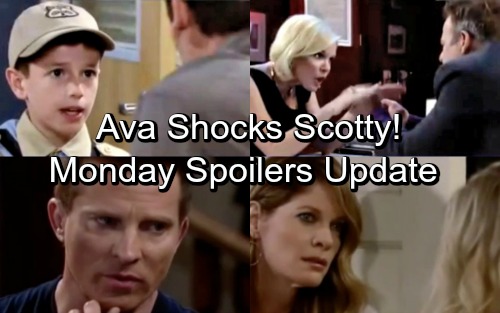 General Hospital (GH) spoilers update for Monday, July 9, tease that Scott (Kin Shriner) will deliver a warning. He’ll tell Ava (Maura West) to brace herself for some big news, but she’ll assume she already got updates. Ava will insist that Franco (Roger Howarth) already mentioned the picture of Griffin (Matt Cohen) and Kiki (Haley Erin). She’ll contend that it’s irrelevant and urge Scott not to use it in court.

Scott will hint that he’s legally obligated to use what his client gives him, but Ava will point out that she’s paying him to tank the case. If he wants to double his usual salary, Scott had better keep that in mind. It looks like Scott will keep Kiki and Griffin’s sex session a secret for the time being.

Elsewhere, Finn (Michael Easton) and Chase (Josh Swickard) will squeeze in some brother bonding. Although Finn’s been reluctant to get to know Chase, he’s doing his best to put the past aside. Finn will be ready to do some connecting on Monday, so don’t miss their sweet scenes.

Over with Michael (Chad Duell), he’ll put the first phase of the plan in action. After getting instructions from Chase, Michael agreed to fake his death. However, he has to do some prep work first. Michael just told Nelle they should marry today, so he’ll work to convince her it’s the right call. Nelle should be a bit suspicious, but Michael will turn on the charm and insist it’ll be great.

Before judge can declare them husband and wife, an issue will likely arise. Maybe it’ll even be part of the scheme. Regardless, Michael will keep plotting and hope things work out. Meanwhile, Sonny (Maurice Benard) and Jason (Steve Burton) will consider the body situation. Julian’s (William deVry) about to do some renovating, which means the corpse and gun could be unearthed.

Jason will fear that the evidence could be found soon enough. Sonny will agree that it’s a serious possibility, so they’ll need get it out of there undetected. Of course, that’s easier said than done. Pulling off this mission could be pretty tricky, even for Sonny and the highly skilled Jason.

Other General Hospital spoilers say Peter (Wes Ramsey) will worry about his fate. Liesl (Kathleen Gati) could murder him if he makes the full confession she’s demanding. That’s certainly not the outcome he has in mind. It turns out Maxie (Kirsten Storms) doesn’t want that either. When Nina (Michelle Stafford) pops in the apartment, Maxie will hope for Peter’s safe return.

Peter hurt Maxie deeply, but she still won’t think death is the right punishment. She’ll just want Peter unharmed and back in custody. At GH, Franco will have a chat with Wyatt (Patrick J. Gibbons). This kid happens to take art therapy from Franco, so he’ll decide to spill the beans about the trapped man he found.