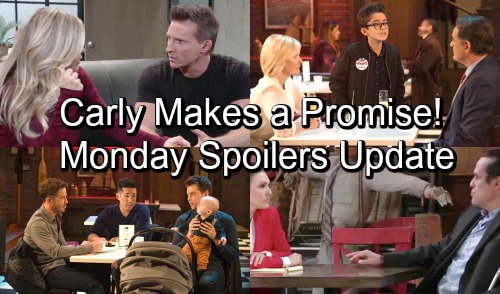 General Hospital (GH) spoilers update for Monday, November 5, tease that Carly (Laura Wright) will need her bestie’s support. During a conversation with Jason (Steve Burton), Carly will open up about the horror she’s been through. As if her Ferncliff stint wasn’t traumatic enough, Carly had to find Mary Pat’s severed head in a barrel. She just wanted to bob for apples, not burn a disturbing image in her brain!

Carly won’t be ready to close the door on this difficult chapter. She’ll tell Jason that there’s a mystery locked up at Ferncliff. Carly will plan to do whatever it takes to solve it, so let’s hope some help’s headed Kevin’s (Jon Lindstrom) way. In the meantime, Ryan (Jon Lindstrom) will remain on the loose in Port Charles. It looks like he’ll cause a little more mayhem in Monday’s GH episode.

Ava (Maura West) was deeply dismayed by the corpse she found sitting in her gallery. As a result, she’ll be pretty jumpy. A man will come through the door and head toward Ava, so she’ll snatch up some nearby artwork. She’ll have a small sculpture she can use as a weapon.

Ava should be relieved when she sees who her visitor is. Ryan will likely pop up to put on a show and act like he’s reaching out to console her. He might lie that he saw the news report and rushed right over to check on Ava. She should be touched that somebody cares. After all, nobody else in Port Charles seems to!

Other General Hospital spoilers say Laura (Genie Francis) will get some advice. Thanks to “Kevin’s” push for separation, Laura won’t think she’s the right person to run for mayor. Spencer (Nicholas Bechtel) may disagree with that. He might encourage Laura to focus on the positive aspects – like fighting for the downtrodden and making PC a better place to live.

Laura may determine that throwing herself into this is a good thing. It’ll be easier than sitting around and moping about her failed relationship. Over with Jordan (Vinessa Antoine), she’ll receive terrible updates. Is more wedding drama on the horizon? Regardless, Curtis (Donnell Turner) will be on hand to help Jordan deal with the crisis. He’ll even offer to help with another problem she’s facing.

Curtis is an excellent private investigator, so he might be able to work with the PCPD on the Mary Pat case. He has ways of finding what the cops miss. Curtis may at least remind Jordan that it’s an option. Meanwhile, Sonny (Maurice Benard) will deliver a threat. He’ll suggest that if Margaux (Elizabeth Hendrickson) keeps pursuing justice, she won’t like what she finds.

Sonny will eventually reveal Jeanette’s (Ely Pouget) involvement in Vincent’s death. She nudged Scully toward making it happen, so Margaux’s in for a shock. She won’t be sure she buys it, but she’ll admit it’s possible. General Hospital spoilers say these two will have to team up. Margaux will work with Sonny to get the full scoop, even if it might be painful.

It looks like some tricky situations are ahead. We’ll keep you posted as other GH details emerge. Stick with the ABC soap and don’t forget to check CDL often for the latest General Hospital spoilers, updates and news.