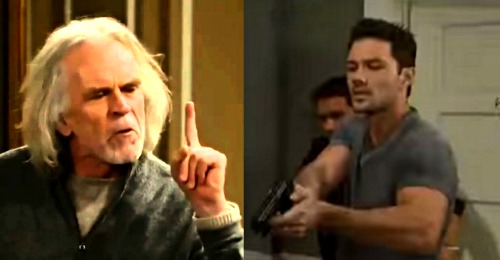 General Hospital (GH) spoilers tease that Nathan (Ryan Paevey) and Dante (Dominic Zamprogna) will be on mission. They’ll show up at an undisclosed location in Friday’s episode and things could go horribly wrong. Dante and Nathan will burst in with their guns raised. They’ll feel like they’re prepared for anything, but they’re probably wrong about that.

Nathan will spot someone and start barking orders. He’ll tell this thug to put his hands in the air. Nathan won’t want the baddie to make any sudden moves. It’s possible that Nathan will be talking to one of Faison’s (Anders Hove) henchmen. Perhaps Nathan will receive a tip that leads him to this location. Dante may simply be there to offer backup.

Of course, there are always major risks whenever Faison’s involved. Nathan and Dante could land in hot water pretty soon. General Hospital spoilers say Lulu (Emme Rylan) will deal with some frustration next week. Will she struggle to get in touch with Dante? If that’s the case, Lulu’s annoyance could eventually become serious anxiety.

Back with Nathan and Dante, it looks like this showdown could be a huge setup. Maybe Faison came up with a plan to capture Nathan. Thanks to Lulu’s interview, Nathan’s now on Faison’s radar. Faison may have even known Nathan was his son before the news broke. He’s a crafty guy, so he might’ve been one step ahead of the game. Regardless, big trouble’s brewing. 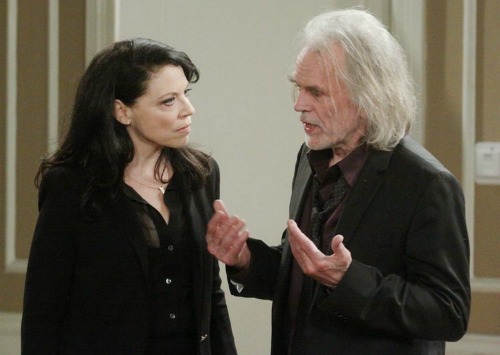 GH spoilers suggest that Dante and Nathan could end up trapped. There are several ways this could happen. For example, more henchmen could appear and knock them out. The room could also be pumped full of something to leave them out cold. If nothing else, they could be backed into a corner while some goons slam the door behind them. Bottom line, Nathan and Dante will land in a tight spot.

If that’s the route GH takes, some escape attempts must be coming up. Dante and Nathan may be in a desperate fight for their lives! We’ll give you updates as other General Hospital details emerge. Stick with the ABC soap and don’t forget to check CDL often for the latest General Hospital spoilers, updates and news.