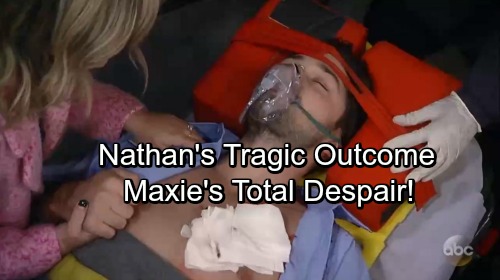 General Hospital (GH) spoilers reveal that fans are still reeling from Nathan’s (Ryan Paevey) terrible gunshot wound. After Faison (Anders Hove) pumped a bullet in his own son, Maxie (Kirsten Storms) begged Nathan to stay with her. They shared some touching moments as they talked about how much they loved each other.

On Monday’s episode, the suspense will rev up. General Hospital spoilers say Maxie will be beside herself in the waiting area. She’ll hope and pray that Nathan can pull through this. Maxie adores her husband and can’t imagine her life without him. She needs Nathan now more than ever!

Maxie’s been worried about how she’ll handle caring for newborn, but this would’ve been a lot easier with Nathan by her side. As Maxie considers a Nathan-less future, she won’t know how to cope. Nathan’s death isn’t something that Maxie has truly prepared herself for yet.

Maxie will try to put that idea out of her mind and await news from the GH staff. She’ll know she needs to calm down for the baby’s sake. The last thing Maxie wants is to lose both her husband and her child in one day.

General Hospital spoilers state that Bobbie (Jacklyn Zeman) will support Maxie during this difficult time. She’ll maintain that Nathan’s going to get the best care. Meanwhile, Amy (Risa Dorken) will help Griffin (Matt Cohen) work on Nathan. When the monitors alert Griffin to a problem, he’ll move in closer and begin chest compressions.

Griffin will do everything in his power to keep Nathan alive. The thought of delivering death updates will fill him with dread. Fortunately, General Hospital spoilers say Nathan will be able to declare his love once more. He’ll pour his heart out to Maxie later and she’ll experience a sense of relief.

It sounds like Nathan will soon be on the mend, but that’s not the end of the story. Alas, this is just false hope for Nathan’s loved ones. GH viewers can expect some shocking twists before Nathan’s departure. Maxie will eventually receive word that Nathan has slipped away. Her heart will be shattered into a million pieces!

Nathan’s death will leave several Port Charles residents in great pain. However, there are no guarantees this demise will stick. In fact, Faison just might have a few tricks up his sleeve. We’ll keep you posted as other GH details emerge. Stay tuned to the ABC soap and don’t forget to check CDL often for the latest General Hospital spoilers, updates and news.