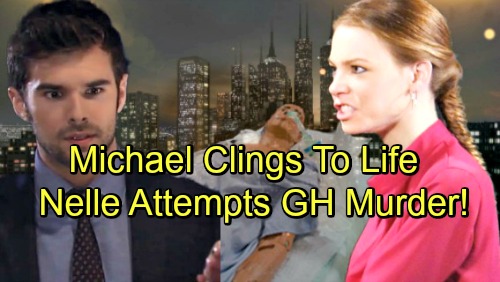 General Hospital (GH) spoilers tease that Nelle (Chloe Lanier) will face a startling setback. GH fans know Chase (Josh Swickard) fibbed about messing with Michael’s (Chad Duell) car. He claimed the brakes would go out once Michael drove 15 miles, so Nelle was ready to roll on this deadly plot.

As far as Nelle knows, the plan is to ride with Michael briefly to secure her alibi. She expects to get dropped off and let Michael drive to his demise. However, Nelle isn’t in the loop on the real scheme. Chase put a camera in Michael’s car, so they’re hoping to record Nelle’s confession and get Carly’s (Laura Wright) conviction thrown out.

Naturally, a soapy twist of fate will change everything. It’ll bring bad news for Michael and Nelle, but good news for GH viewers. We’ll be treated to some serious drama! General Hospital spoilers say a car crash will put Michael in a life-threatening situation. It looks like Nelle will fare a bit better, but the fate of her unborn child remains unknown.

When Sonny gets updates on Michael, he’ll be overwhelmed with fear and pain. Sonny won’t just be worried about himself either. He’ll know that if Michael were to die, the sorrow would kill Carly. There’s no way she could survive the death of another son, especially when she’s stuck in rotten Ferncliff. Carly’s having a hard enough time as it is, so this would really push her over the edge.

Josslyn (Eden McCoy) will also be concerned for her big bro. She loves Michael with all her heart, so the idea of losing him will make her a nervous wreck. Jason (Steve Burton) will be busy with Carly for a while, but he’ll undoubtedly fret later. He’ll hate that he couldn’t protect Michael in this disastrous moment.

Of course, Nelle won’t care about Michael’s terrible condition. In fact, she’ll only be more determined to get what she wants. Nelle should be miffed that the accident didn’t finish Michael off. It would’ve been the perfect chance to take care of her problems, but Nelle’s awfully resourceful. She’ll most likely think fast and come up with an alternative strategy.

General Hospital spoilers say desperation will bring more danger. Nelle will do something drastic, which gives us some interesting options. Will she try to unplug Michael’s life support? That’s a possibility to consider. Smothering is another one. Nelle would do just about anything to take Michael out of the picture.

Thankfully, someone should stop Nelle from committing murder. If she gets caught, Nelle might shift gears and pretend she’s there to weep over her dying husband. General Hospital fans know Nelle can turn on the waterworks in an instant.

Nevertheless, Nelle won’t shed any real tears over Michael. When he inevitably pulls through, what will Nelle’s next frantic move be? We’ll keep you posted as other GH details emerge. Stay tuned to the ABC soap and don’t forget to check CDL often for the latest General Hospital spoilers, updates and news.