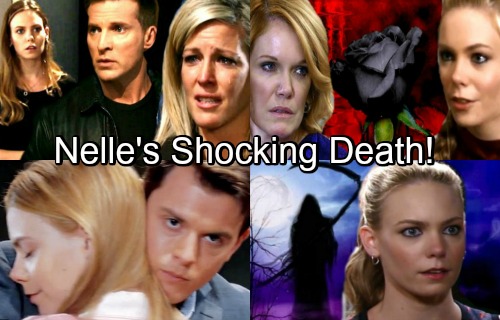 General Hospital (GH) spoilers tease that Nelle’s (Chloe Lanier) exit storyline will bring some explosive drama. Since Nelle’s a pro at scheming, she’s naturally been a bit suspicious of Michael’s (Chad Duell) proposal. Fortunately, Michael’s previous forgiveness is in his corner. Nelle’s duped him before, so she’ll ultimately put her fears aside and take pride in her manipulation.

Of course, pride comes before a fall and that’ll soon be the case with Nelle. She’s bound to get what she has coming, but what will her exact consequences be? GH seems to have three options to choose from. For starters, it’s possible Nelle will make her getaway. She might find herself backed into a corner and bolt with or without the baby.

However, that’d probably be the least satisfying option. Plenty of GH fans want Nelle to suffer, so the show may try to do better than that. That brings us to another alternative. Nelle could get locked up in Pentonville or Ferncliff, which would also leave the door open for a comeback. A crazy Nelle escape would be fun at some point. Perhaps Chloe Lanier would agree to a return arc down the road.

Then again, GH may feel like it’s time to end this once and for all. The writers might want to give Nelle a deadly sendoff and explore the wild aftermath. We know Nelle will have some exciting scenes with Chase (Josh Swickard) just before she heads out. That could point to Nelle being a free woman in the moments before her exit.

General Hospital just did a trial with Carly (Laura Wright), so it makes sense that they wouldn’t want to do another one so soon. Will Chase nail Nelle with evidence and catch her trying to flee? Could Nelle give him the slip and get shot by someone off screen? It’d be the perfect setup for a Nelle murder mystery. This kind of story just begs for one!

Josslyn (Eden McCoy), Ava (Maura West) and Monica (Leslie Charleson) could join the suspect pool as well. Of course, Zach’s sister is still out there somewhere. Sharon Grant (Bree Bea) might be an excellent surprise killer. Whatever the case, a murder mystery would certainly interest many viewers.