Most viewers expected Patient Six to be real Jason Morgan as well. Maybe it’s time for GH to throw in a curveball. Jason’s about to come home with a conundrum box, but the person it’s designed for may be a big surprise. Valentin (James Patrick Stuart) is the natural assumption since the box features the Cassadine crest and he has an alliance with Peter, but will General Hospital really make it that easy? 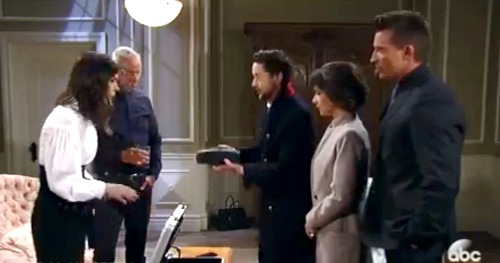 Perhaps this box is actually meant for another Cassadine to open. What if GH is giving us another hint about Nikolas Cassadine’s return? Fans will recall that Ava suspected Nikolas was at the Russian clinic. Patient Six turned out to be Jason, but the Nikolas mention may have been significant.

When Valentin cut his finger, an ominous drop of blood fell on the Cassadine family tree. It landed right on Nikolas name, so that could’ve been another clue. Instead of indicating that Valentin truly killed Nikolas, it could mean that Nik will be back for revenge one day. The bloodshed could be far worse that that that little drip! 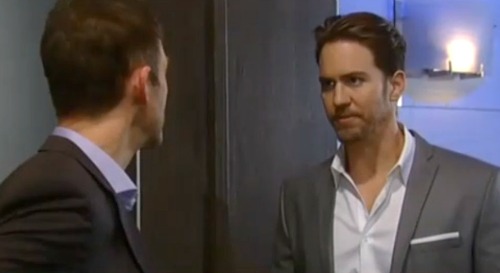 Nikolas’ name also came up during Lulu’s (Emme Rylan) ballot drama storyline. General Hospital has been careful to keep Nik in our minds. Will the latest Nikolas mention involve this conundrum box? Nikolas may have some crucial secrets inside. If this box indeed belongs to Nikolas, Valentin may not want those secrets exposed. His deception may run deeper than anyone thought.

Peter (Wes Ramsey) made Jason disappear by keeping him at that clinic for five years. Maybe he helped Valentin do the same thing to Nikolas. After all, Jason was Patient SIX. That suggests that there were five other patients before him. Nikolas might be one of them! Even if Nik’s being held in separate part of the facility or somewhere else entirely, Valentin and Peter may be hiding the fact that he’s alive.