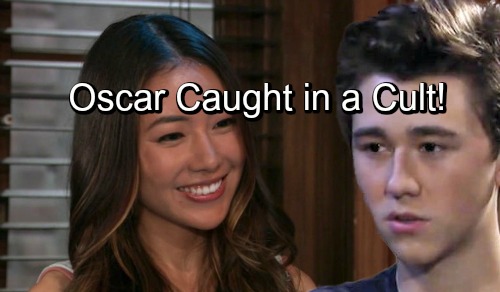 General Hospital (GH) spoilers tease that Kristina (Lexie Ainsworth) and Oscar (Garren Stitt) are headed for trouble. Someone shady just walked into their lives and neither one of them suspects a thing. When Daisy (Kelsey Wang) first debuted, she seemed pleasant enough. Daisy showed up at Charlie’s Pub and cheerfully handed out concert flyers. She chatted with Kristina a bit and that was that.

However, GH fans knew Daisy would pop up again with a purpose eventually. That purpose may be to drag Kristina and Oscar into a risky situation. As of right now, Oscar’s the one who’s most vulnerable. He was desperate for a place to live immediately, so Daisy had just the solution. He’ll be staying somewhere with a bunch of other people. They all just pay what they can and do chores to pitch in.

This certainly sounds like some sort of commune, which usually turns into cult drama on soaps. Daisy also seems to be a free spirit. Her name suits her since she almost feels like a flower child who would be all about drugs and having a good time.

Of course, Oscar doesn’t have long to live if he gets emancipated and rejects the clinical trial. He just wants to enjoy the time he has left on his terms. In other words, Oscar’s a guy with nothing to lose. He’d probably see no reason to turn down whatever drugs they offer.

Oscar might just say screw it and let himself get carried away. He’d probably like the chance to take his mind off his problems. However, this could be incredibly dangerous since Oscar’s prone to seizures. His brain tumor brings them on anyway, so who knows what’ll happen if that brain’s on drugs?

Kristina could get caught in this mess, too. Daisy’s very interested in getting to know her, so she may be this cult’s recruiter. Daisy might be able to tell that Kristina’s feeling aimless. Kristina’s longing for a new direction, so she’s a prime cult candidate.

Nevertheless, Kristina’s older and perhaps a little wiser than Oscar. She may catch on fast and hopefully save Oscar before it’s too late. General Hospital put Oscar in Kristina’s orbit for a reason. He’s a bus boy at Charlie’s and she’s a bartender, so they’ll be hanging out a lot. Thanks to their new Daisy link, that’ll be another way for them to cross paths.

Let’s hope Kristina can warn the right characters and get Oscar out of all this shadiness! We’ll give you updates as other General Hospital news comes in. Stay tuned to ABC’s GH and don’t forget to check CDL often for the latest General Hospital spoilers, updates and news.