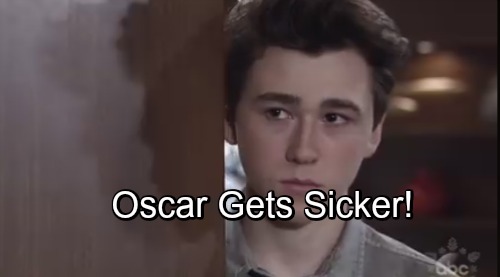 Terry is Oscar’s pediatric oncologist, and Elizabeth is already aware of Oscar’s brain tumor, having been confided in previously by Kim. Could something have happened to Oscar while working at Charlie’s Pub? Could he have had another seizure?

If Oscar had a seizure while at work, Julian would have no choice but to call 911 at the very least and inform Kim or Drew, as Oscar’s parents who still have the say-so over any medical procedures Oscar may need. Oscar’s not quite that emancipated yet, the court hearing has not yet happened.

Even though Alexis Davis (Nancy Lee Grahn) is representing Oscar, she confided in Julian that she thought when Oscar realized what was necessary for him to support himself and live on his own, which are requirements for emancipation, maybe he’d get intimidated by the difficulties and back out of it.

Unfortunately perhaps for Oscar himself, he has not! Kim would absolutely fall apart upon hearing that Oscar has had yet another seizure, because that means the tumor is getting worse and time’s running out for Oscar! Julian may have quite a time trying to settle her down.

When Terry hears about this happening from Kim, as no doubt she would, it may affect her emotionally even though she is trying to be a total professional in this dire situation. Many medical professionals involved in cancer treatment, and especially in children and young people, walk a fine line emotionally and have to take care not to get too involved with the patient as it can take a toll on them.

Terry may have gotten a little too close to Oscar’s case and need to talk to Elizabeth, her lifelong friend, for emotional support. General Hospital viewers hope for a good outcome for Oscar, but he needs to change his mind very soon about the medical trial as it appears to be his only hope. Stay tuned to General Hospital and keep a check on General Hospital spoilers to see what happens!