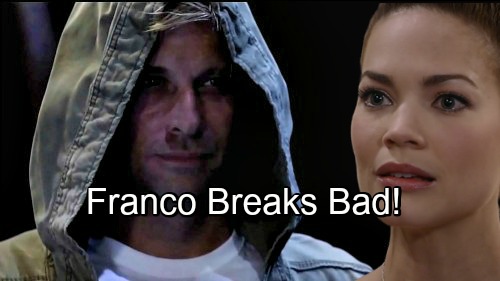 General Hospital (GH) spoilers tease that Franco (Roger Howarth) will remain one of Port Charles’ most complicated characters. Thanks to his troubled past, Franco runs into many obstacles. Some PC residents have been willing to accept Franco’s brain tumor excuse and move on. Liz (Rebecca Herbst) certainly views Franco as a redeemed, viable love interest.

However, other GH characters haven’t been as quick to forgive and forget. It’s doubtful Jason (Steve Burton) will ever fully get over the past – and perhaps he shouldn’t! Sometimes wounds just run too deep. Even though Franco had a legitimate reason for his horrific behavior, it doesn’t mean Jason has to be buddies with the guy. That’s fine for Drew (Billy Miller), but Jason can do his own thing.

Of course, you never know what the future holds on a soap. Baddies can become good guys and revert right back to the dark side. What would happen if Franco took another violent turn? Roger Howarth weighed in on that during an interview with Michael Fairman. He wouldn’t be opposed to the idea of Franco sinking into the darkness again.

Howarth suggested that he’s down for anything. He does what he’s told, so he’d certainly be willing to play Franco as a villain. When asked how he’d react to that development, Howarth argued that he’d be all in. He said, “Great. Then we will do that. It could be. It is a little strange, and it seems to me, that they’ve grown reluctant to have some of the primary characters on the canvas behave poorly.”

Howarth used Franco’s childhood abuse storyline as an example. He praised Greg Evigan’s work as the nasty Jim Harvey, but seemed to think the plot would’ve had more impact with a familiar face as the abuser. Howarth doesn’t believe soaps should shy away from complex situations like that.

“I think we do ourselves a disservice when we bring in a fantastic actor to play the bad guy,” Howarth said. “I don’t know why the child abuse of Franco wasn’t from his actual father, Scott Baldwin (Kin Shriner). How cool would that have been?” Most GH fans probably wouldn’t use the word “cool” here! People love Scotty, so this is one area where viewers would probably disagree with Howarth.

However, Howarth made another comment that just about everyone can get behind. “I do think that soaps need bad guys,” Howarth said. He’s definitely right about that, but should Franco still be one? General Hospital writers have done their best to redeem him, so that’s clearly not the plan at the moment. If Franco ever needs an exit strategy in the very distant future, they could go for it then.