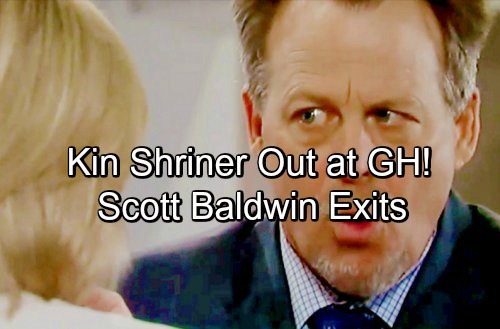 General Hospital (GH) spoilers reveal that some stunning news just hit the soap world. Kin Shriner is out as Scott Baldwin on the ABC soap. The timing of this shocker is pretty strange. GH just celebrated its 55th anniversary, so Scott had a nice little tribute in Friday’s episode. He also did a Q&A session on Twitter the same afternoon.

In his earlier tweets, Shriner gave no indication that he was leaving his role behind. He answered questions about the love interests he’d like to be paired with as well as the returns he’d like to see. Shriner even talked about some storylines he was hoping for. It seemed like he expected to be at GH for many years to come.

However, Shriner changed his tune a few hours later. “Scott Baldwin out,” Shriner said. He added General Hospital’s Twitter handle for clarification. Still, some viewers were in denial about the bombshell. Say it ain’t so, Scotty! One fan replied, “NO!!!!!!!!!!!!!!!!!!!!!!” Shriner quickly quoted the tweet and said, “True Scott Baldwin has left the building.”

Another viewer posted an angry GIF and insisted she was “so upset to hear this.” Shriner softened his stance a bit and suggested he was grateful for the memories. “I had a good run @GeneralHospital,” Shriner said. “I wish them another 55!”

Of course, we have to wonder what exactly went down. It’s worth mentioning that Shriner recently expressed disappointment in a promo for the 55th anniversary special. Although Scott had some scenes in the actual episode, he was noticeably absent from the nostalgic video on social media. 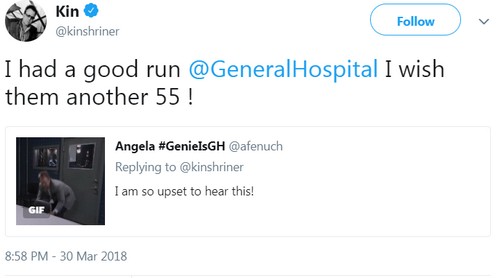 It’s possible sort of beef behind the scenes that led to this departure. Shriner may have been angry enough to walk away. Then again, General Hospital might’ve given him the boot. Either way, many GH watchers will miss having Scott around! He’s been an important part of Port Charles for a long time, so saying goodbye should be tough.