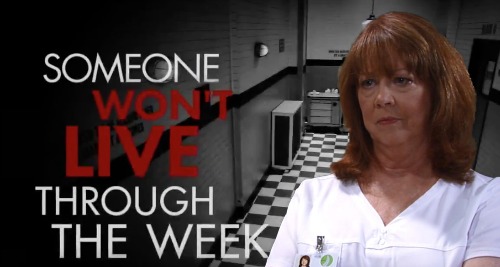 General Hospital (GH) spoilers tease that a new promo promises a GH daytime event! The show’s gearing up for some shockers as Halloween draws near. This is the perfect time to rev up the fear factor and inject some creepiness into the show.

In a new preview video, Ryan declares that “tonight’s going to be unforgettable.” It’s clear that he’s got something deadly in store. The promo also features Laura (Genie Francis) and Carly (Laura Wright) peeping around Ferncliff. They’ll come dangerously close to finding Kevin, but that won’t quite pan out for the poor patient.

However, Carly and Laura won’t be Ryan’s biggest headache this week. That’ll come in the form of Mary Pat. GH viewers will recall that Mary Pat’s in the loop on the twin situation. She’s seen both Kevin and Ryan, so she knows Dr. Collins was trying to help his previously presumed dead brother.

Mary Pat’s kept her mouth shut thus far, but will it stay that way? General Hospital spoilers say Mary Pat will sense an opportunity. She’ll feel like maybe she has some leverage, so she’ll try to exploit it. Of course, what Mary Pat doesn’t know just might kill her! She’s not aware that the mild-mannered doctor has been replaced by a cruel murderer.

Mary Pat will assume she’s putting pressure on Kevin, but the mistake will cost her. By going up against Ryan, Mary Pat is likely sealing her own fate. GH’s latest promo reveals that someone won’t live through the week, so we’d bet big money on Mary Pat’s demise.

Once Ryan gets a taste of death again, he’ll want even more. Ryan will probably claim additional victims in the weeks ahead. Kiki (Hayley Erin) seems like a real possibility since Ava’s (Maura West) tangled up with Ryan and Erin’s leaving the show.

General Hospital fans won’t want to miss all the peril and destruction. We’ll give you updates as other GH news comes in. Stay tuned to ABC soap and don’t forget to check CDL often for the latest General Hospital spoilers, updates and news.