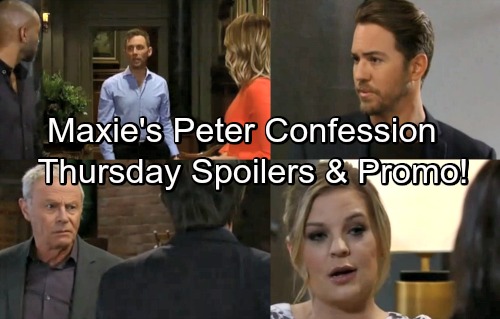 General Hospital (GH) spoilers for Thursday, April 26, tease that Curtis (Donnell Turner) will meet up with Nina (Michelle Stafford). They’ll discuss their Peter (Wes Ramsey) takedown mission and try to figure out a new strategy. Nina will mention a perfect opportunity just as Valentin (James Patrick Stuart) enters the room. He’ll try to score more info on their Peter plot, but he probably won’t have much luck.

Meanwhile, Sam (Kelly Monaco) will check in with Maxie (Kirsten Storms). She’ll want to know how she’s holding up without Nathan (Ryan Paevey). Maxie will admit she still has plenty of rough days. Her grief can be overwhelming at times, but she’ll suggest she’d much rather talk about Peter. Maxie will gush about what a big help he’s been. She’ll insist that Peter’s a dependable friend and great guy. 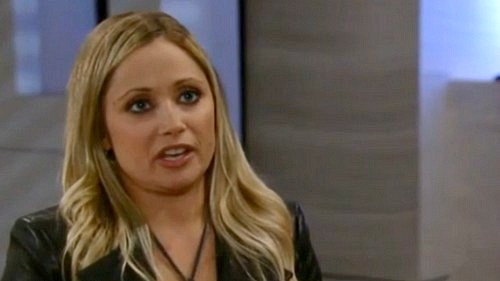 Elsewhere, Lulu (Emme Rylan) will turn to Peter for advice. Perhaps this involves her risky interactions with Heinrik. Lulu may not be sure what to do next, but Peter will undoubtedly have some good ideas. He’ll continue his manipulation and lead Lulu in the direction he wants her to go.

Maxie and Lulu will also have an uncomfortable encounter on Thursday. The hostility’s fading a bit on Maxie’s end, but there’s still loads of awkwardness. Lulu will keep up her efforts to make amends, but Maxie just won’t be ready. GH fans know Maxie’s still in pain, so she’ll need more time to work through her feelings.

Other General Hospital spoilers say Finn (Michael Easton) will bump into Robert (Tristan Rogers). When Anna’s (Finola Hughes) name comes up, Finn will insist that his association with her is over. He’ll assure Robert that he’s moving on and living his best life. Finn will argue that Anna should take her chance to do the same. 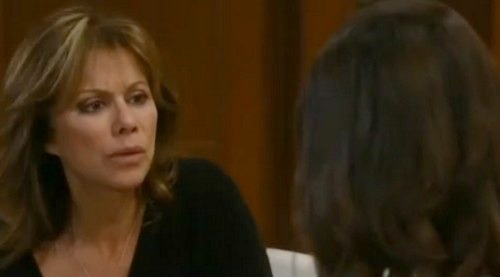 At Alexis’ (Nancy Lee Grahn) place, Anna will drop by with questions. She might recap the Switzerland trip and the Cassadine-connected conundrum box. Anna may ask Alexis to weigh in on a few things, so she’ll definitely stir up some suspicions.

Alexis will wonder if this has something to do with Anna’s search for Faison’s (Anders Hove) son. She’ll want the scoop, but Anna will obviously leave out the main details. She’s doing her best to keep her connection to Heinrik a secret, but you can bet it won’t stay that way. A handful of people already know the truth, so it’s bound to spread sooner or later.