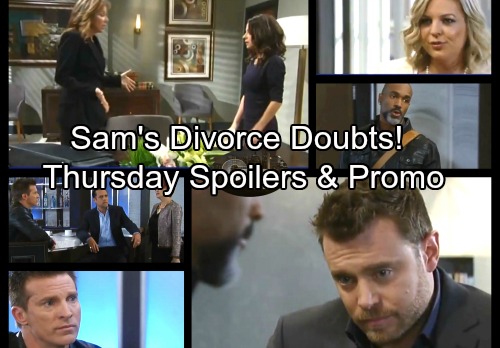 General Hospital (GH) spoilers for Thursday, January 11, tease that Maxie (Kirsten Storms) will have a chat with Peter (Wes Ramsey). She’ll note that she’d like to talk to him about a mutual friend. Maxie will probably express some concern over Lulu’s (Emme Rylan) mission to take down Faison (Anders Hove). She may wonder why Peter would suggest such a dangerous assignment.

Peter might contend that Lulu’s a big girl who can take care of herself. Maxie knows Lulu’s got plenty of moxie, but she’ll still battle some fears. Naturally, Maxie will worry about Nathan (Ryan Paevey) and their baby as well. General Hospital spoilers say Maxie will have a terrible nightmare, so all of this is really taking a toll on her.

Meanwhile, Lulu will ask Nathan if he’s given any more thought to her plan. She wants to team up and it looks like Nathan will soon get on board. Unfortunately, Nathan will enrage Dante (Dominic Zamprogna) in the process. GH fans know Dante is nervous about this mission, so he won’t approve of any help Nathan sends Lulu’s way.

Dante will also pay a visit to Julian’s (William DeVry) pub in Thursday’s episode. Someone will throw a brick through one of the windows to send a message. Julian will explain the situation to Dante and vow to fight this. He has no intention of letting anyone run him out of his business. 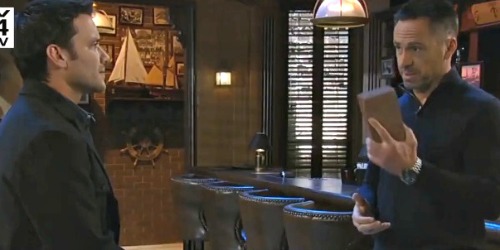 Elsewhere, Curtis (Donnell Turner) will have updates for Drew (Billy Miller). He’ll admit that his progress has been slow, but he finally has some info to pass along. Drew desperately wants to know more about who he used to be, so let’s hope Curtis has important news on his pal’s past.

Across town, Alexis (Nancy Lee Grahn) will push Sam for honesty. She won’t judge her daughter’s response, but she needs to know where Sam stands. Since Sam’s preparing to divorce Jason (Steve Burton), Alexis will wonder if she has any doubts. She’ll insist that now’s the time to speak up if Sam doesn’t want to go through with it. 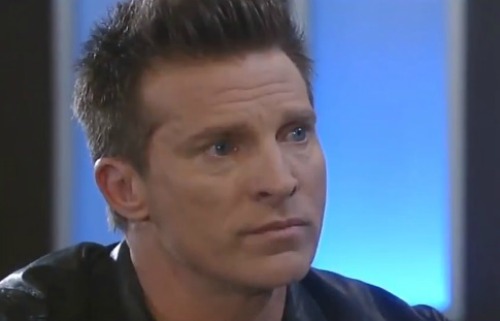 Alexis is on “Team Drew,” but she understands that Sam’s feelings could be changing. Sam will give her mom an annoyed glare, so she’ll probably reiterate that this is what she wants. She still has feelings for Jason, but she’s been adamant that she only sees Drew in her future. The look in Sam’s eyes could tell a different story!

Other General Hospital spoilers say Diane (Carolyn Hennesy) will meet with Jason about finalizing the divorce. Sonny (Maurice Benard) will find out what’s up, so he’ll undoubtedly try to be there for his buddy. He’ll hate that Jason’s in pain, but at least the traitor search is heating up. It’ll give Jason something to focus on until Sam potentially gives him another chance.

Besides, this divorce is about to take a detour. Legal complications are brewing in Port Charles. We’ll keep you posted as other GH details emerge. Stick with the ABC soap and don’t forget to check CDL often for the latest General Hospital spoilers, updates and news.