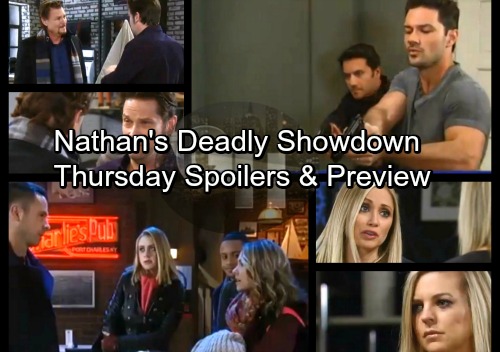 General Hospital (GH) spoilers for Thursday, January 18, tease that Ned (Wally Kurth) will reach out to Alexis (Nancy Lee Grahn). He’ll ask for help with his campaign, but she’ll turn him down flat. Alexis will contend that she doesn’t support Ned’s platform, so he’ll have to look elsewhere for assistance.

Meanwhile, Molly (Haley Pullos) will grow frustrated over her landlord situation. General Hospital spoilers hint that Molly and TJ (Tequan Richmond) may be forced out of their apartment. Julian (William deVry) will chat with them at the pub and try to figure out some options. Molly will snap that they can take care of themselves. She certainly won’t be looking for help from Julian. 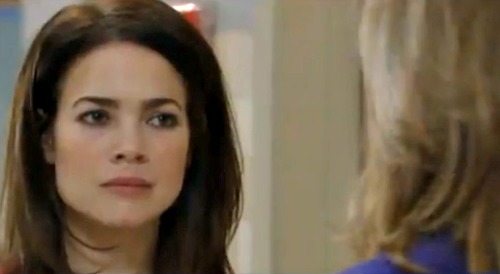 Nevertheless, Julian will continue to do what he can. Molly, TJ and Kiki (Haley Erin) will all be part of an important meeting. GH spoilers state that they’ll come together to fight the Charles Street development, but it won’t be easy. Jim Harvey (Greg Evigan) is becoming quite a nuisance in town. Just ask Franco (Roger Horwarth)!

When Jim pesters Franco again on Thursday, there’ll be some tense moments. Jim will push for more details on Franco’s relationship with Liz (Rebecca Herbst), but that won’t go over well. Franco will snap that Jim doesn’t need to know the ins and outs of his personal life.

However, Jim already knows too much. There’s a good chance he has secrets that relate to Drew’s (Billy Miller) past. At GH, Laura (Genie Francis) will offer Liz a warning about trusting Jim. She’ll argue that all Jim cares about is the almighty dollar.

While Liz mulls over Jim’s greed, Maxie (Kristen Storms) will face some difficult tasks. First, General Hospital spoilers say Lulu (Emme Rylan) will beg Maxie for forgiveness. She’ll be sorry for letting her job get in the way of their friendship. Lulu will regret doing the interview and potentially putting Nathan (Ryan Paevey) in danger.

Maxie will try to get past this, but she’ll have another tough goal to accomplish. Now that the world knows Faison (Anders Hove) is Nathan’s father, Maxie’s anxiety will rev up. She’ll do her best to calm down for the baby’s sake. Maxie’s skyrocketing stress level isn’t doing her little one any favors.

Elsewhere, Nathan and Dante (Dominic Zamprogna) will barge in on a criminal. Nathan will point his weapon and shout that the perp should put his hands in the air. He’ll add that he or she shouldn’t make any sudden moves. It’s too early for a Faison showdown, so they must be confronting another GH baddie.

General Hospital fans won’t want to miss the exciting scenes ahead. We’ll give you updates as other news comes in. Stick with the ABC soap and don’t forget to check CDL often for the latest General Hospital spoilers, updates and news.