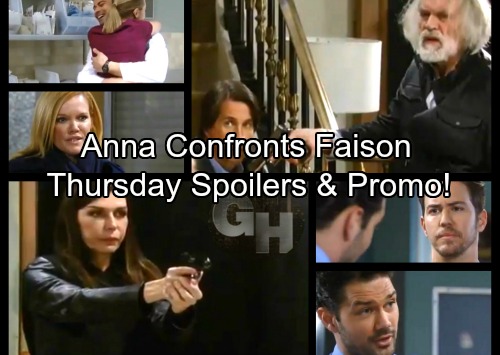 General Hospital (GH) spoilers for Thursday, January 25, tease that Nathan (Ryan Paevey) and Dante (Dominic Zamprogna) will have a chat with Peter (Wes Ramsey). They’ll call him down to the police station in hopes of securing his help. Nathan will suggest that they need to keep the people of Port Charles safe. He’ll be especially concerned about his own family members.

Nathan will contend that there’s only way to get this situation under control. They have to find Faison (Anders Hove) and lock him up for good. Nathan will push for Peter’s cooperation, but things could get tricky. Peter refused to assist Anna (Finola Hughes), so he’s obviously got something to hide. Of course, GH fans probably know what it is. All the evidence points to Peter being Faison’s other son, Heinrich.

General Hospital spoilers say Peter will squirm as he deals with the cops. He won’t want anyone to find out his big secret. However, Peter can at least talk about Lulu’s (Emme Rylan) Faison hunt. His updates should leave Dante in a panic. He may rant about Lulu putting herself in danger, but Nathan might point out that Dante does that every day.

Lulu is obviously taking unnecessary risks, but that’s just because she wants to bring down a vicious criminal. Her motives aren’t all that different from Dante’s, so he may dial down his anger and focus on saving her. Lulu could certainly use some help, but it appears Jason (Steve Burton) and Sonny (Maurice Benard) may show up by the end of the week. 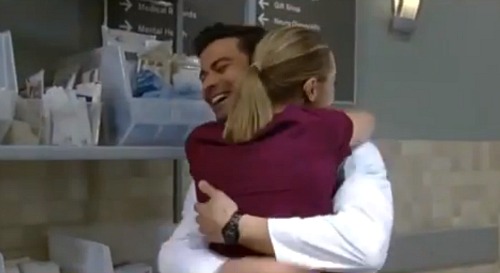 In the meantime, Faison will tell Anna to drop her gun or he’ll blow the head off her lover. Finn (Michael Easton) will look nervous as he waits to find out his fate. At GH, Kiki (Haley Erin) will get some great news regarding her doctor goals. It sounds like she’ll be one step closer on Thursday. Kiki will thank Griffin (Matt Cohen) for his support and pull him into a warm hug.

Nearby, Liz (Rebecca Herbst) will talk to Kevin (Jon Lindstrom). She’ll note that she has the perfect subject for him to analyze. Since Andre (Anthony Montgomery) can’t be a shrink to Franco (Roger Howarth) anymore, Liz may want her fiancé to have some sessions with Kevin. 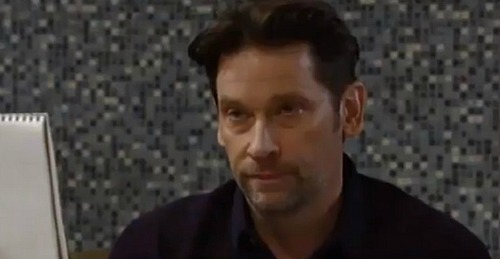 Elsewhere, Franco will go into a dark place again. His secrets will leave him feeling unsettled and alone. General Hospital spoilers say Ava (Maura West) will notice Franco’s foul mood. She’ll wonder what’s up, but Franco may not divulge much.

Finally, Amy (Risa Dorken) will stop by Maxie’s (Kristen Storms) place. She’ll want to tell her something about the baby, so Maxie will reluctantly let her in. What will Amy reveal? We’ll keep you posted as other GH details emerge. Stick with the ABC soap and don’t forget to check CDL often for the latest General Hospital spoilers, updates and news.