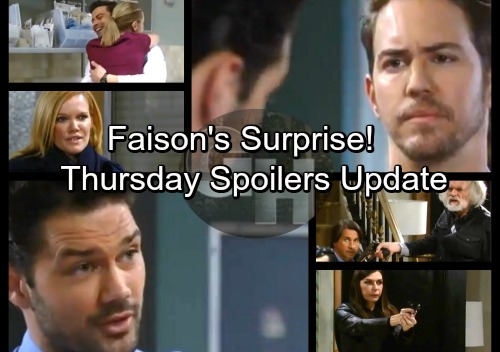 General Hospital (GH) spoilers update for Thursday, January 25, tease that Kiki (Haley Erin) will nearly jump for joy. At GH, she’ll offer Griffin (Matt Cohen) her gratitude as she wraps her arms around him. Kiki will be on cloud nine, so it sounds like her mission to become a doctor is going well.

Nearby, Ava (Maura West) will have an interesting chat with Franco (Roger Howarth). When he gets snappy, Ava will ask what’s got him in such a snit. General Hospital spoilers say Franco will be worried about his childhood secret and how it could affect his relationship with Liz (Rebecca Herbst). Jim Harvey (Greg Evigan) will undoubtedly remain a huge concern.

While Franco mulls over his problems, Liz will turn to Kevin (Jon Lindstrom). She’ll suggest that she’s got the perfect subject for him. Perhaps Liz is hoping to get Franco in therapy for his issues. Andre’s (Anthony Montgomery) behind bars now and his advice wasn’t very helpful anyway. Kevin may be willing to assist Franco, but he’ll have his work cut out for him.

Other General Hospital spoilers say Maxie (Kristen Storms) will get an unexpected visitor. Amy (Risa Dorken) will pop over with news about Maxie’s baby. She’ll ask if she can come in, but Maxie won’t seem thrilled about the idea. Nevertheless, curiosity should get the best of her. Maxie will want to hear Amy out and discover what’s up.

At the police station, Nathan (Ryan Paevey) and Dante (Dominic Zamprogna) will discuss the Faison (Anders Hove) drama with Peter (Wes Ramsey). Since Peter is almost certainly Heinrich, he’ll be reluctant to cooperate. Peter put up a fight during his conversation with Anna (Finola Hughes), so he may do the same thing here. He’ll probably throw out more excuses and try to wiggle out of this jam.

Nathan will insist that he has to find Faison and lock him up permanently. He’ll hope Peter can help with that, but he’s sure to face resistance. Across town, Faison will hold his weapon on Finn (Michael Easton) and deliver a threat. He’ll push Anna to toss her gun away from her. If Anna resists, Faison will promise to pump a bullet in her lover.

Fortunately, Finn will emerge from this dangerous encounter unscathed. He’ll end up helping out at GH, which is good since someone will get shot pretty soon. We’ll give you updates as other General Hospital details come in. Stay tuned to the ABC soap and don’t forget to check CDL often for the latest General Hospital spoilers, updates and news.