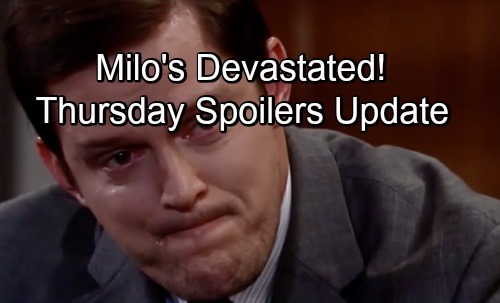 General Hospital (GH) spoilers update for Thursday, July 5, tease that Oscar (Garren Stitt) will grow frustrated with his mother. Kim’s (Tamara Braun) getting closer to Julian (William deVry) every day and that certainly isn’t what Oscar has in mind. He’s rooting for his parents’ reunion, so he’ll grill Kim about it before he kicks off his Aurora internship.

Oscar will feel like Kim wasting precious time. He won’t be in high school forever, so he’ll try to get the ball rolling on this ASAP. Oscar wants to bring his family together, but he’ll be out of luck for now. Despite Kim’s lingering feelings for Drew (Billy Miller), she’ll insist on sticking with Julian.

However, Oscar may want to hold out hope for his parents’ romance. Drew and Sam (Kelly Monaco) will talk about their divorce in Thursday’s episode, so they’ll formally break up and create even more distance. These two need a clean break if they really want to start fresh and find happiness.

Meanwhile, Franco (Roger Howarth) will have a meltdown. He’ll seethe at the thought of Dr. Bensch (James DePaiva) getting away with his actions. Franco will simply refuse to let that happen. He’ll grumble about everything Kiki (Hayley Erin) endured and yell about the sexual predator who targeted her. Franco will push Scott (Kin Shriner) to keep his word and do his part to rip Dr. Bensch to shreds.

GH spoilers say Ava (Maura West) will be much calmer at Charlie’s Pub. She’ll be more confident as well. Ava will reveal her plan to Julian and insist that it’s going to succeed. She’ll fully believe Dr. Bensch is going to pay the price for his behavior, but some huge snags are brewing.

Other General Hospital spoilers say Griffin (Matt Cohen) will spar with Stella (Vernee Watson). He’ll leave her feeling disrespected on the job, so he’ll definitely get a lecture for it. Stella will speak her mind and hope to put Griffin in his place. Once Stella makes her angry spiel, Griffin may try to make amends. He’s a kind soul, so he won’t like the idea of leaving so much tension between them.

Across town, Milo (Drew Cheetwood) will return with a heavy heart. In Thursday’s preview video, Milo has tears in his eyes. Has a loved one passed away? Could a relative be battling an illness instead? Whatever the case, Milo will seem awfully upset. There won’t be much Sonny (Maurice Benard) can do, but that won’t stop him from trying. Sonny will just want Milo to know he’s always got his back.

It sounds like General Hospital has some emotional moments in store. We’ll give you updates as other GH news comes in. Stay tuned to the ABC soap and don’t forget to check CDL often for the latest General Hospital spoilers, updates and news.