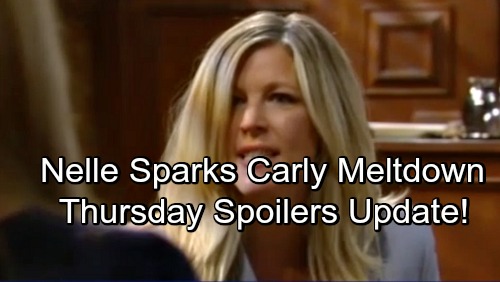 General Hospital (GH) spoilers update for Thursday, June 7, tease that Ava (Maura West) will sit down for a chat with Griffin (Matt Cohen). She’ll once again offer an apology and hope they can move past their last fight. Things spiraled out of control after the Nurses Ball. “GrAva” split before Kiki (Hayley Erin) made her way up to Griffin’s room for a one-night stand.

Griffin will feel terrible about deceiving Ava. He’ll suggest that he also needs to apologize again. Griffin will allude to the mistakes he made and maybe even consider coming clean. However, Griffin won’t spill the secret just yet. General Hospital probably has a more exciting plan to expose Griffin and Kiki’s actions. They need to let the suspense build for a while.

Meanwhile, Kiki will be desperate for some help. Alexis (Nancy Lee Grahn) suggested they should find some of Dr. Bensch’s (James DePaiva) previous victims. That could really boost Kiki’s case against him. General Hospital spoilers say Kiki will turn to Lulu (Emme Rylan) on Thursday. She’ll hope she can get a sexual harassment story cooking, so Lulu will agree to write one.

Lulu will also rant about Nelle (Chloe Lanier) during a chat with Dante (Dominic Zamprogna). She’ll refuse to believe Nelle’s telling the truth about Carly’s (Laura Wright) shove. Nelle’s told plenty of lies since she first showed up in Port Charles. She hasn’t done anything to earn Lulu’s trust or anyone else’s.

Bobbie (Jacklyn Zeman) will definitely drag Nelle through the mud in court. She’ll gripe about how Nelle wormed her way into the family and became a parasite they can’t get rid of. Once Margaux’s (Elizabeth Hendrickson) done grilling Bobbie, Josslyn (Eden McCoy) will be next. She’ll nervously take the stand and face Margaux’s tricky questions.

GH spoilers state that Joss will be torn about her testimony. She believes Nelle, so she’s upset with Carly for crossing the line. At the same time, Josslyn doesn’t want her mom to end up in prison. She can’t let some momentary anger rob Carly of 25 years. Josslyn will just try to do a delicate dance and avoid making the situation worse.

Once Nelle’s on the stand, she’ll undoubtedly turn on the waterworks. Nelle will want to gain some sympathy and trash Carly in the process. General Hospital spoilers say Carly will rip into Nelle before the day’s over. She’ll have a major meltdown and snarl about Nelle being to blame.

The judge will surely settle Carly down and attempt to keep everything on track. It appears Carly’s outburst will support her insanity defense. She’s not crazy, but she can seem like it when Nelle’s around. It doesn’t take much to make Carly look unhinged.

Finally, Franco (Roger Howarth) will tell Liz (Rebecca Herbst) his plans. He’ll still be stuck on the idea of meeting her relatives. Franco’s going to make some heartfelt promises at their nuptials, so there should be more guests to hear them.

It sounds like some great scenes are coming up. We’ll give you updates as other GH news emerges. Stick with the ABC soap and don’t forget to check CDL often for the latest General Hospital spoilers, updates and news.